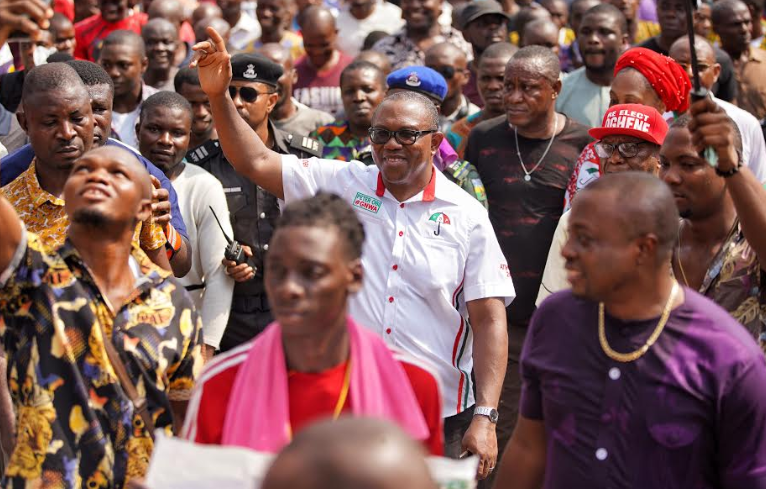 I would have preferred to start this article with a long laugh. Unfortunately, the seriousness of the topic at hand will not allow me. Firstly, I am an avid user of Twitter and it was not long ago, when people all over Twitter Nigeria, bickered on how the PDP is not a good-enough opposition to challenge the ruling APC. Now, the odds have shifted hands and may be against the incumbent. That is not the reason for writing this article though.

The reason however, is that there is a steady force of acceptance, rocking the foundations of the APC and evenly, cementing the gains of the PDP in the build up to the February 16th polls. Just like a standard military operation, the airstrike (state-wise rallies), are there to cause maximum damage, but the ground forces (grassroots mobilization) come in to mop up the enemies and ensure a decisive victory. Peter Obi has done both, and unlike the proverbial Jack of all trades, he is master of both.

Engaging stakeholders like the NBA, the CAN in various states, the Traders Associations in various markets, the business community in various states, the farmers’ association in the country and the members of the press, is a very peculiar and crucial part of election. Mr. Obi is never known for plenty words, but for actions. Most of the time, the Presidential campaign trail is out there in various states doing the needful, Mr. Obi is deep there in the dirt of the markets and the farms, collating opinions and concerns from the Nigeria people.

Apart from the actual fact that the aforementioned demography are the ‘real’ voters, they also help in feedback gathering. In one of Peter Obi’s surprise visits to a market in the North Central, he was met with so much cheers that he could not speak. When he finally spoke and stated how he was going to introduce the MSMEs model used in supporting innovation in most of Asia, to Nigeria, the audience burst into a unique song coined for every loved person bearing ‘Obi’ as a name. “Obi kererenke Obi,” the happy and cheerful members of the audience chanted, until he departed the market. This is always the case, when he takes a surprise trip to the various markets in the South-West and the South-East where he comes from. The South-South is no different

The role of Obi in the campaign is quite unique. He is the poster boy of the campaign. Everyone, not minding party affiliation, has a soft spot for him and that is why he often receives massive accolades in and out of his territory. Is it related to his pristine achievement in Anambra State as a two-term Governor where he not only performed, but saved money for the state and invested massively in infrastructure for the state? Is it related to his effort at bringing Anambra State from 28th to 1st in education in the whole country? Is it related to his frugal behavior which people see as a panacea to the many cases of wastage that has besieged the foundations of the nation from the power-packed roars of the Aso Rock, to the flat lands of Borno and even to the Irokos of Enugu?

Well, I wouldn’t know. What I know, is that he is loved and no matter how anyone tries to throw a mud at him, it never sticks. He is the force behind the Atiku’s grassroots campaign and he is part of the reason the PDP has become a stronger competitor in the upcoming presidential election, not minding that few months ago, people were labeling the presidential election as a walk over for the APC.