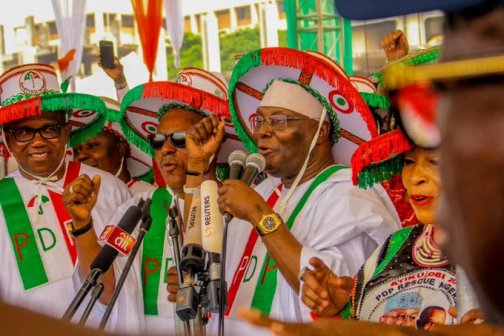 Despite being a workday, the PDP had their presidential rally at the Tafawa Balewa Square, a venue twice bigger than the venue on which the APC held their presidential campaign rally in Lagos. The rally which was anchored on the joblessness and insecurity which the Buhari-led administration has brought upon Nigeria, enjoyed massive cheers from the attendees.

The various speakers hinted on the challenges the country has been facing under the Buhari administration, including insecurity, bad economy and job losses. The National Chairman of the PDP stated clearly that the PDP has uncovered plans by the APC to rig the election. He went on to state that the PDP will not allow that happen. He also further tasked the attendees to vote PDP and defend their votes.

The VP candidate of the PDP, Peter Obi solicited votes based on the pro-business manifesto of the Atiku candidacy. When Atiku Abubakar spoke, he reminded the people of his resolve to create jobs. He admonished the people of Lagos to vote him for the jobs and wealth he intends to create for the business hub of the nation. The crowd joyously dispersed after the national anthem.