Warning! You Will Go To Jail If You Involve In Election Malpractice, NYSC DG Warns Corp Members 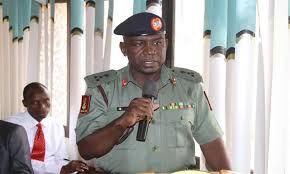 Maj.-Gen. Suleiman Kazaure, the Director-General of the National Youth Service Corps (NYSC), has given a stern warning to all corps members to avoid being involved in election malpractice as anyone caught will be prosecuted under the law.

NAN reports that Kazaure gave the warning in Ibadan on Tuesday during his advocacy and sensitisation visit to Oyo State.The director-general warned the corps members not to accept any form of inducement, including money from politicians, strangers and members of the public. He advised them to always study their environment and be security-conscious, saying that corps members participating in election duties must be in their NYSC uniform.“Your Identity cards must be on you; ensure your phones are recharged with enough airtime; be armed with pocket notes; have the phone numbers of your local government inspectors and Divisional Police Officers (DPOs).Peradventure there is any problem, protect yourself first and report to the nearest police station. The security operatives will all be deployed during the exercise. Note that participation is not compulsory for you.

“Never drag anything with anybody. You may decide not to participate because it is optional. Any corps member that violates the law having been warned, would be prosecuted.INEC officials will train you people and clothe you with everything needed for the elections. After the training, they will select the best among you; so be good ambassadors of the scheme, your family and Nigeria,’’ Kazaure said.Also speaking, the Chairman, Ibadan South-East Local Government, Mr. Abimbola Omiyale, promised that the government would do its best to ensure adequate security of the corps members.“We are all joining hands to make sure that the corps member who will work anywhere in the state, will be protected and that the election is violent-free,” he said.

Also, the Oyo State NYSC Coordinator, Mrs Emiola Ambekemo, said the sensitisation was to remind the corps members that they must be law abiding.“They are already aware of the right things to do especially in times like this. We just need to remind them that they must be law abiding as anyone who violates the rules will face the law as the director-general has said,” she said.Speaking on behalf of the corps members, Mr Ajiboye Okoye assured the director-general and the management of NYSC that the corps members would not compromise in any way.“We have taken a resolution today to abide by the law, guidelines of INEC and be good ambassadors of the scheme,’’ he said.

What do you think about this statement ? Share your views below