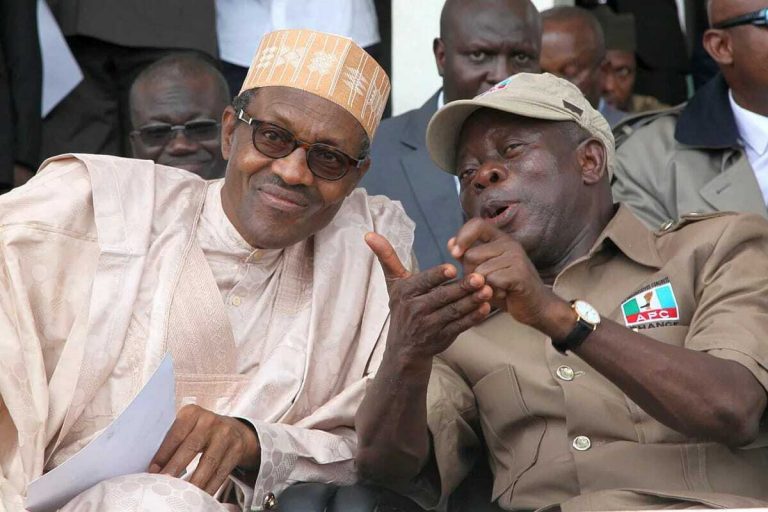 Thousands of `traditional and fanatical’ supporters as well as admirers of President Muhammadu Buhari in Plateau trooped out today (Saturday) to block the motorcade of the president heading to the campaign ground of the All Progressives Congress (APC) in the state.

News men report that security personnel including the police and soldiers were overwhelmed by the massive crowd of youths including women who wanted to have a glance of the president, Vanguard reported.

NAN observed that it took the president’s convoy over an hour to cover a journey of 10 minutes following the inability of the security officials to control the mammoth crowd blocking the motorcade.

The president, at the palace of Gbong Gwom Jos, charged traditional rulers to complement government’s efforts in ensuring peace and stability in the country.

President Buhari, who maintained his administration was working for the future of the Nigerian youths, called on the traditional rulers to continue to educate and enlighten the youths on the need to be law abiding and patriotic in their conducts.

“You have a role to play in complementing government’s efforts toward building a strong and prosperous economy,’’ the president told the Gbong Gwom Jos.

The president commended Gov. Simon Lalong for his efforts to maintain peace and stability in the state, saying that “I have a lot of respect for the governor.

He earns my respect and he has such a balance mind.’’ In his remarks, the Gbong Gwon Jos, Jacob Gyang Buba, appealed to politicians to ensure peaceful conduct of the forthcoming general elections. He expressed concern over the way and manner some politicians were spreading fake news and promoting hate speeches.

“We will continue to talk to our people to maintain peace,’’ he said. NAN observed that the rally was brought to an abrupt end as the uncontrolled crowd prevented the security officials from performing their duties.

NAN also reports that public address systems as well as cables meant for live coverage by radio and television stations were damaged by the mammoth crowd of APC faithfuls.(NAN)