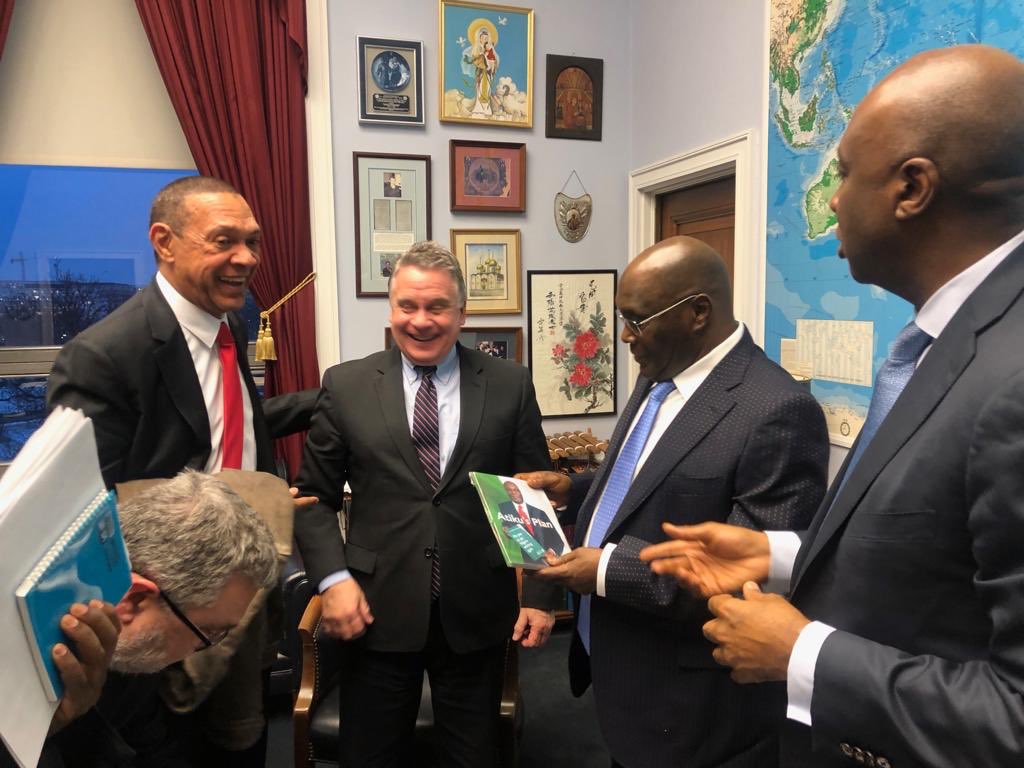 THE All Progressives Congress (APC) has criticised the United States of America for allowing former Vice President, Abubakar Atiku into the country despite allegations of money laundering against him.

Atiku’s visit to America on Thursday was his first visit to the country since he left office as Nigeria’s vice president in 2007.

In a statement on Friday, signed by the Chairman of the APC, US chapter, Adeshegun Labinjo, the party said that “Atiku’s entry and presence in the USA is a mockery of President Bush’s Presidential Proclamation 7750 which affirms the denial of US visa to foreign officials involved with corruption and other supporting legislation by the Congress”.

“APC-USA believes that Alhaji Abubakar Atiku should be held accountable for his involvement m money laundering,” the statement read.

Labinjo further stated that Atiku remains a thief “no matter where he … visits”.

“Congressional records point to the fact that Atiku engaged in money laundering through his wife who was then resident in the USA,” he wrote.

“We see Atiku, who is the 2019 presidential candidate of the Peoples Democratic Party (PDP) of Nigeria, as a self-centered corrupt Vice President under President Obasanjo’s regime.”

This statement is coming regardless of the fact that Atiku was one of the major financiers of the APC’s successful presidential campaign in 2015 which brought in President Muhammadu Buhari and Vice President Yemi Osinbajo.

In fact, it was Atiku’s defection to the APC at the time, alongside many other members of the PDP, that tipped the scale heavily to APC’s favour.

Some of the big names that joined the APC at the time were Rabiu Kwankwanso, Bukola Saraki, Aminu Tambuwal, and Rotimi Amaechi. All of these, but Amaechi, have since returned to the PDP.

In November 2018, when reports circulated that Atiku was processing a US visa, the Minister of Information and Culture, Lai Mohammed, adviced the US embassy in Nigeria not to oblige him.

“We are not unaware that Atiku has engaged the services of some lobbyists to persuade the US to issue visa to him. Our position is that if the former Vice President is seeking the US visa we have no problem about it. However, we want the US government not to create the impression that it is endorsing one candidate over the other,” Mohammed cautioned.

“Impression must not be created that the US government is endorsing one particular candidate over the other. I am sure you will all recall the Jefferson case and the cold $90,000 in a fridge.”

Atiku is scheduled to hold separate meetings with the US Chamber of Commerce and a delegation of Nigerians living in the country.
What are your thoughts ?
#2019GeneralElections1AmericaAPCAtiku