2019: Should Buhari be re-elected on mantra of war against Boko Haram, corruption? 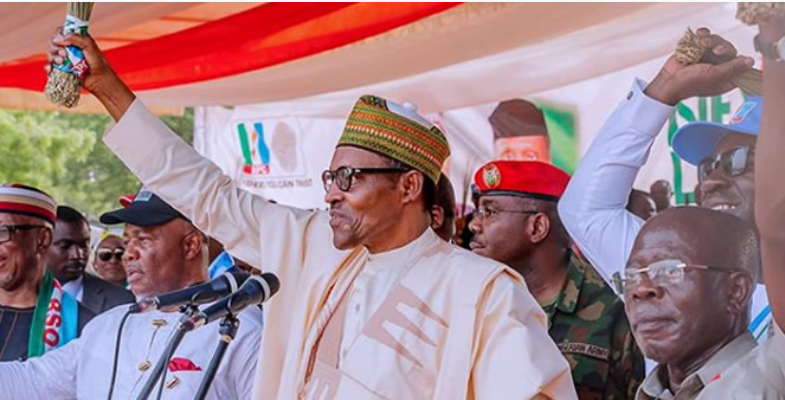 WITH less than 30 days to the general elections, President Muhammadu Buhari is pleading with Nigerians to re-elect him so that he can  consolidate on his achievements in the fight against corruption, insecurity and to ensure economic development.

The president was speaking on Wednesday night in Abuja at a two-hour Town Hall meeting tagged “The Candidates“, and said the All Progressives Congress (APC) nominated him as its presidential candidate because he had delivered on the campaign promises of the party.

These were the fundamental issues on which his ‘Change’ mantra was based before he was elected in 2015.

Prior to the Wednesday’s programme, he had campaigned in Uyo, the capital city of Akwa Ibom State late last year and also emphasised that his administration had delivered on its campaign promises to fight corruption, reduce insecurity and grow the nation’s economy in spite of doubts by the opposition.

“We are arresting corrupt people and prosecuting them and we will not stop. I assure you that we have collected property and collected cash,” he said

He said that APC’s campaign was based fundamentally on three fundamental issues of enhancing the economy, ensuring security and fighting corruption.

Despite this assurance by the president, many Nigerians have expressed reservations that he might not have achieved all these in the face of recent happenings. In the opinion of others, using the same catch-phrase to the campaign may not really swing Nigerians to his side this time around.

He has said that the military was faced by limitations of resources to battle the terrorists, not many Nigerians again believe this is actually the reason insurgency seems intractable.

Is Nigerian Military constrained by limitations of resources against Boko Haram?

The country is confronted by limited resources to wage the war against terrorism adequately, he said.

But was the president right that there were resources limitations to fight the war? Could this be a lame excuse to support the recent wave of terrorist attacks? Service Chiefs insist that the Boko Haram terrorists have been defeated— although technically−attacks by the group on Nigerian Army formations on July 20, October 8 and November 22, 2018 in which a total of 116 soldiers and officers were reportedly killed were pointers to the fact that the Federal Government still has a lot of ground to cover in its anti-terrorism war.

The attacks took place when insurgents swarmed 81 Division Task Force Brigade in Jilli, near Geidam, Yobe State. Three officers and 28 soldiers were confirmed killed. Other reports say the casualty figure was as much as 62 for the Nigerian Army.

Another deadly attack on the Nigerian Army formation near Niger Border and around the Lake Chad on October 8, 2018 left 15 soldiers dead. While the most recent and much talked about — Metele attack in Guzamala Local government in Borno State had 70 soldiers dead.

The soldiers were part of the 438 people killed by the terrorists between January 1 and November 22, 2018 in as many as 37 attacks across the Northeast according to Wikipedia.

The recent upsurge of attacks against the military by the terrorists has been blamed on three factors by critics of the government —failure of the president to change the service chiefs that he appointed three months after he took over power on May 29, 2015, poor motivation of the soldiers at the forefront and near obsolete weapons they are fighting with.

There have been several reports from the Northeast about the sorry state of welfare of the soldiers combating the terrorists and also allegations of corruption against military top brass.

Frustrated soldiers in the wake of the attacks by the terrorists have released videos of those attacks while lamenting the quality of weapons they fight with.

These are indications that the early gains of the war against terrorism were eroded by the continuous presence of the service chiefs, the poor welfare of the combatants and allegations of corruptions against the officers.

In August 2015 when he inaugurated them, president Buhari charged the new heads of the Nigerian military to defeat the Boko Haram insurgents within three months.

More than three years after, the service chiefs are still grappling with the insurgents they claimed have been decimated and the military has recorded huge casualties in the wake of renewed attacks by the terrorists.

While over 20 attacks were carried out by the terrorists in January 2015 in Borno State, 19 attacks were recorded in February of the same year.

By May 2015, there was no attack recorded or carried out by the terrorists while only seven and four each were recorded in April, June and July respectively in Borno, Yobe and Plateau states as well as in Chad.

As a result of these feats,  the president announced to the world that the terrorists were technically defeated − there were no attacks in May, June, September and December 2015. On the eve of Christmas in 2015, president Buhari declared that Nigeria has technically won the war against Boko Haram.

In December 2018 when the Global Terrorism Index released its report, Nigeria for the fourth consecutive year, occupied the third position among the countries worst hit by terrorism, globally, because of the activities of Boko Haram and herdsmen.

The International Crisis Group, (ICG), a non-governmental organization working to prevent war, in a new report,  revealed that the violence between herders and farmers in Nigeria had claimed six times more lives than the Boko Haram insurgency in 2018.

Buhari has spent N1475.143trillion on defence in three years

In April 2018, president Buhari, approved a release of $1bn for the procurement of security equipment to fight insurgency and revolt in the country.

While it appears that the government had committed much resources to prosecuting the war, the president, on the other hand, has not demonstrated enough will power to make the service chiefs accountable for the deaths of soldiers fighting Boko Haram. He has not shown a keen interest in their welfare and the weapons with which they engage the terrorists.

President Buhari is touted as a man of integrity and this largely accounted for why he won the hearts of many Nigerians on his way to electoral success in 2015.

Three years down the lane, his much talked about the war against corruption has been criticised as one-sided which looks away from atrocities committed by those believed to be his allies and members of his party.

Former President Olusegun Obasanjo had also lamented that the president was condoning corruption and that he had failed woefully and as such should not seek a re-election.

His opponent and presidential candidate of Peoples Democratic Party (PDP), Atiku Abubakar also mocked him that “corruption” has become official under his watch.

Atiku was speaking against the warm reception given to the former Secretary to the Government of the Federation, Babachir Lawal by the Federal Government, even after it was established that the former SGF was involved in corruption.

President Buhari was forced by public opinion to drop Lawal from his cabinet after he was alleged to misappropriated funds meant for rehabilitation of Internally Displaced Persons (IDPs).

When he was confronted by the Anchor of the “The Candidates”, Kadaria Ahmed, Buhari challenged Nigerians to bring their evidence against Lawal.

Under his administration, former governors under the platform of PDP who were being investigated for corruption have also defected to his APC and already currently serving in his Presidential Campaign Council.

But the president defended himself during the programme, he said he was being careful with the war against corruption.

“When I came in uniform in 1984, we arrested the President, the Vice President, and governors and ministers, and said that they were guilty until they can prove themselves innocent,” Buhari said

“I told you why I have to be careful. If there are strong allegations, people should come out with strong evidence like names of companies looted, contracts awarded, then, we take them before the court and ICPC and we have to trust the system and allow them to complete their investigation.

“If we just arrest them and look the other way as we did in the military system…democracy is a multi-party system that does not approve that. So, if there is sa trong allegation, the government may ask people to go like the former secretary general.”