Highlights of Buhari, Osinbajo’s appearance on ‘The Candidate’ 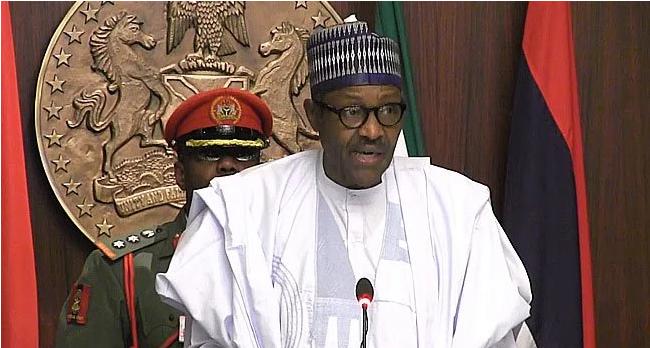 PRESIDENT Muhammadu Buhari and Vice President Yemi Osinbajo appeared as guests on ‘The Candidates’, a voter enlightenment programme organised by Daria Media in collaboration with the Nigeria Television Authority (NTA), sponsored by the MacArthur Foundation.

The two-hour programme saw Buhari and Osinbajo answer questions from the presenter, Kadaria Ahmed, the in-house audience, as well as those drawn from the social media, in a bid to convince Nigerians on why they should be voted for another four-year term in office.

Here’s a summary of what they said:

Buhari said that in a democratic setting, the method of fighting corruption is more tasking unlike when he was a military Head of State between 1983 and 1985. He said he does not think his administration has looked away when anyone was pointed out as corrupt.

“When I came in uniform in 1984, we arrested the President, the Vice President, and governors and ministers, and said that they were guilty until they can prove themselves innocent,” Buhari said

But under the present dispensation, “I have to be careful, people are just not arrested like that”, and a lot more needs to be done in order to be able to prove allegations of corruption, Buhari said.

On why Babachir Lawal, the ousted Secretary to the Government of the Federation, is yet to be prosecuted despite evidence of wrongdoing, Osinbajo interjected, saying that the case is still before the Economic and Financial Crimes Commission (EFCC) and that “each and every person who have allegations against them and has been duly investigated, will be put on trial”.

Osinbajo also clarified the allegation against him by the House of Representatives with regards to the emergency situation in the North East. He said the money he approved for the procurement of emergency items were duly appropriated and domiciled in the Central Bank of Nigeria (CBN) and the utilisation was properly tracked to prevent misuse.

ON THE ALMAJIRI SYSTEM

Buhari pointed out that primary school education is the responsibility of the local governments and that if state governors are not allowing the LGs to access the funds needed to provide proper primary education to the millions of almajiris, then it was the duty of the LGs and the media to speak up against such corrupt governors.

What then is the function of the Universal Basic Education Commission (UBEC) if primary education is solely the responsibility of the LGs?, the host Kadaria Ahmed asked. To this Osinbajo replied that UBEC was set up to assist the states with funds to boost primary education.

“What has happened now is that from the Paris Club refunds that was given to the states, the federal government now paid off all of their counterpart fundings, so all states can now access the UBEC funds without any criteria,” he said.

Buhari said the challenges facing the counter-insurgency operations was the fact that warfare was not a conventional one.  The terrorists chose where and when to attack, hence the troops need to be highly mobile and have a very good communication system. But “we have resources limitation”, Buhari said. “Because a lot of Nigerians don’t feel that we are in an emergency, that the military needs a lot more money for equipment, a lot more money for spare parts, for communication, and so on.”

On the other hand, Buhari said the Boko Haram is being supported by forces outside Nigeria.

Buhari also posited that soldiers in the North East were being well catered for. He noted that banks were built across strategic locations in the North East to make it easier for the troops to access their money. However, Buhari said he supported the court-martial of some of the soldiers who went on protest, because “soldiers are not supposed to demonstrate”.

Buhari described the situations in Benue State where many were killed in herdsmen/farmers clashes as unfortunate but added that the solution was to re-establish the cattle routes and grazing corridors as was the case during the first republic.

Osinbanjo, on his part, also agreed with Buhari that banning open grazing will not solve the problem. He said the administration is working on recharging the shrinking Lake Chad as one of the solutions to herder-related crises.

“The long-term plan is to eventually create ranches, but ranches have to be privately owned. But at the moment, you can’t just suddenly one day say ‘no more grazing, that’s the end of it’, that doesn’t happen anywhere.

“In all of the places where the problem (of herders crisis) has been solved, it was a gradual process. It’s that same gradual process that we are going to take,” Osinbajo said

ON PERSONS WITH DISABILITY

Buhari believes the videotapes were not real. He said he was “overwhelmed” at the technology that was employed in making the video. If the clips were real, Buhari wondered how Ganduje could not have sent another person to collect the monies on his behalf but had rather collected them in person “smiling”.

Both Buhari and Osinbajo said once the courts have given an order of permanent forfeiture, such monies will be paid into the treasury single account (TSA) and that they are being used to finance budget deficits especially with regards to critical infrastructural projects, like the rails, the second Niger Bridge, road networks and so on.

Osinbajo said that the Buhari administration is carrying out the single largest social intervention programme since the history of Nigeria, and that this programme is aimed at lifting millions of Nigerians out of poverty, in line with the core ideology of the APC.

He blamed the issue of extreme poverty in Nigeria on the past administrations, whom he said were frivolous with the country’s revenues and didn’t save enough to take care of the masses.

“From 2010 to 2014 Nigeria earned the highest ever from oil revenues. In four years, Nigeria earned $383 billion, yet poverty figures went from about 82 million to 112 million. That’s the reason we have a poverty problem.

“Poverty doesn’t disappear overnight. When people are poor, they remain poor unless the government does something about it,” Osinbajo said, stressing that the present administration is fighting poverty.

Osinbajo insists that there is no cause for alarm over the country’s debt. He said Nigeria’s debt to GDP ration is among the lowest in the world at around 20 per cent. Unlike in other developed countries and even some African countries.

Ethiopia, for instance, has a debt to GDP ration of over 50 per cent, Ghana is 60 per cent, according to Osinbajo.

What needs to be improved upon, Osinbajo said, is Nigeria’s debt to revenue ratio. He said the country at the moment is not making enough money in comparison to its debts, but he promised that the present government is working on generating more revenue.