Buhari finally appeared on live TV, and was embarrassingly lifeless 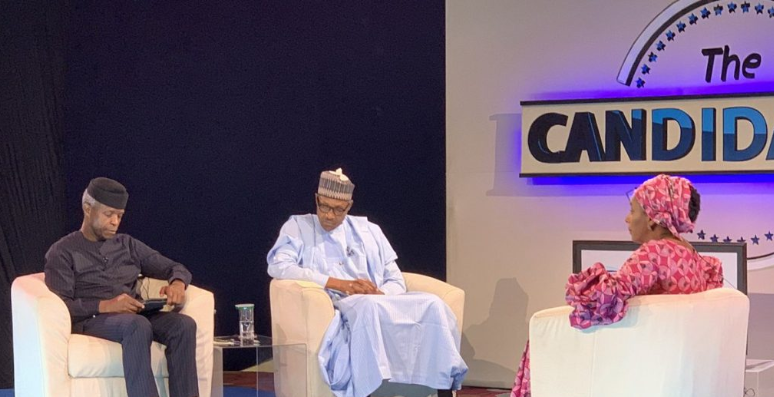 All Progressives Congress (APC) presidential candidate Muhammadu Buhari finally featured on a television in real time, and it was utterly disastrous.

Buhari appeared alongside vice president Yemi Osinbajo, and the duo practically debated each other under the guidance of moderator Kadaria Ahmed who made no attempt to shield the president from scrutiny.

Buhari was measured, weighed and evaluated and was found wanting. The President of the Federal Republic of Nigeria was as lifeless as American leader Donald Trump may have said.

The president, as if battling some hearing impediment, repeatedly needed Osinbajo and the moderator to repeat or rephrase simple questions anyone should get first time.

The president’s performance was so bad that transportation minister Rotimi Amaechi’s body language had this to say.

It gets even worse when you watch the video!

Here are four of the major talking points where Buhari dropped the ball or simply passed the buck (the townhall could be the strongest proof yet the First Lady Aisha Buhari’s repeated claims that her husband was not in charge could be true):

When confronted about his continued support for Kano governor Umar Ganduje – who was apparently caught on tape receiving bribes in dollars – Buhari wondered why the governor did not send someone else to receive the bribe on his behalf. Osinbajo wanted to speak on behalf of the president but Ahmed would not allow him.

“He can talk for himself,” she pushed back.

Buhari sprinkled doubt on the authenticity of the #GandujeGate tapes, which has been verified by BBC and Premium Times.

As I told you, I have seen the clip. I don’t know how much technology (doctoring) was used but can Ganduje fail to trust someone to take it (the bribes) to him? Does he have to take it himself?

Buhari said the case was in court adding that he hoped to get some answers from the judiciary before he campaigns in Kano State. But the president seemed to be unaware of the fact that a court ordered Kano lawmakers not to probe Ganduje. Police also threatened wrath against any resident who protests against the governor.

So much for Buhari’s fight against corruption with former Secretary to the Federal Government Babachir Lawal still walking free.

One Richard Ezekiel, a member of the townhall audience, asked President Buhari when he would sign the disability bill into law (there are about 25 million persons living with disability in Nigeria).

Buhari said the National Assemble rejected the bill. That’s not true. National lawmakers have passed the bill and forwarded to Buhari’s desk for approval into law. It seemed the president was unaware. He was also not aware of the travails of the Chief Justice of Nigeria until last Saturday. Osinbajo said that himself.

Buhari and Osinbajo lived in parallel universes as far as the herdsmen crisis was concerned, Wednesday’s townhall showed.

Buhari said the solution are the grazing routes introduced in the First Republic. Osinbajo said ranching was the answer. Ahmed wanted to know why the president and his vice were not on the same page. Osinbajo came to the rescue by saying the solution was “a mixture of the two (ranching and grazing routes)”.

In Nigeria, 13 million children are out of school, among them are the Almajiris. Buhari was asked how he would solve the problem. The president dodged responsibility and said the Almajiri challenge was for local governments to face.

When asked about how he would restructure education, Buhari said the Nigerian media should expose what the local governments are spending on such.