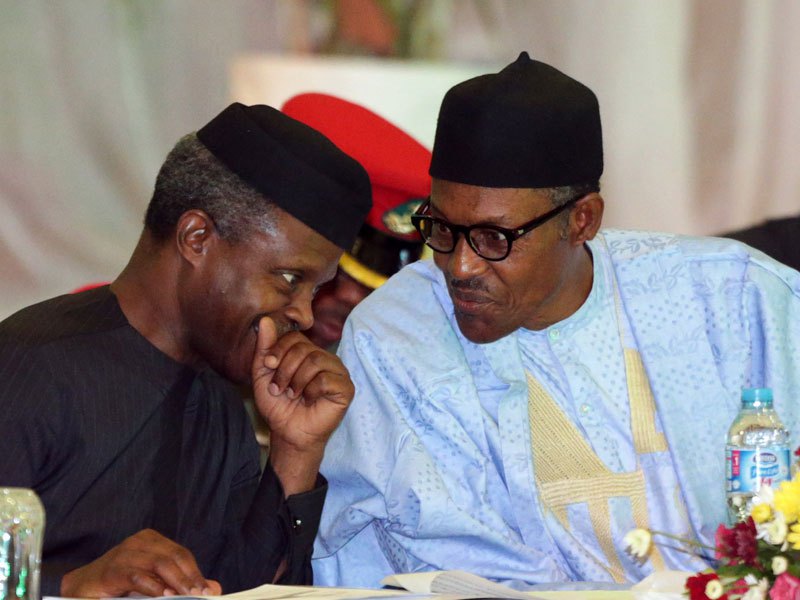 PRESIDENT Muhammadu Buhari and his Vice, Prof. Yemi Osinbajo on Wednesday night disagreed on a proposed sustainable solution to end the farmers/herders clashes.

The communal clash reported to have claimed 3,641 lives in the past three years have received both local and global attention.

While the President argued that the state governors should have assisted to revive the grazing routes which according to him, was taken-over by influential Nigerians, his Vice, Osinbajo maintained that the National Economic Council (NEC) had agreed on ranching and grazing reserves.

Both candidates contesting under the platform of the ruling All Progressives Congress (APC) spoke in Abuja during a live show programme, ‘The Candidate’, organised by Daria Media, the Nigerian Television Authority (NTA), in collaboration with PLAC and the MacArthur Foundation, to respond to contending national issues and unveil their plans ahead on the 2019 general election.

The candidates were subjected to serial questions regarding the slow pace of prosecution and judgement on corruption cases, alleged rising injustice in the military on the part of officers at Boko Haram forefront, the 2019 election among other issues of interest to ordinary Nigerians.

Question from an audience read out by Kadaria Ahmed, the anchor to the discussion programme sought to know the President’s plan on finding a permanent solution to the herders/farmers killings.

Reacting to the herdsmen crisis, Buhari blamed the Benue State Governor, Samuel Ortom for initiating the anti-open grazing law in the state, such that prevented the pastoralists from easy access to water and pastures.

“What happened started from Benue State and it was unfortunate. We, the federal government foresaw it. I asked the minister of agriculture and rural development to go to the archives and find out the heads from the First Republic where that incredible leadership, there was cattle routes and grazing areas, dams and veterinary clinics but some important personalities encroached the cattle routes, the grazing areas and if a herder and his 200 cattle push ahead wherever their way to the water, they will just go through there…….”

“We already started and we want to ask, especially the Governors, the movement is from north to south and its quite predictable. After the harvest, the cattle will move Southward for water and pasture and then our borders….”

The President argued further that, “…when structures were tampered with, in terms of cattle routes and grazing areas, it is very difficult. We have sent these things back through the ministry of agriculture and rural development to the governors so that we can create these corridors.

“But for a government like Benue governor who they said they have banned cattle rearing and banned grazing, we are in the same country and I expect our governments to insist on the routes to be re-established in the grazing areas but to say that cattle cannot move is very difficult. Benue is complaining, but I heard they are already in Bayelsa from there are they going to the Atlantic?” he queried.

Meanwhile, in the Fact Check conducted by the ICIR, over President Buhari’s true public position on the anti-open grazing law, the report revealed verifiable evidence where the President was being persuaded to support the law as part of measures to reduce conflicts in Benue State.

In a statement recently issued by his aide on Media and Publicity, Garba Shehu, he claimed that President Buhari had insisted on the implementation of the anti-open grazing law in Benue which was not entirely true.

But while observing trajectory of President Buhari’s arguments over the matter, Osinbajo swiftly interjected narrating efforts and the current position of the NEC over the issue.

He shared parts of the Livestock Transformation Plan where it was agreed that willing State governors would provide land for the development of ranches as a service to the pastoralist including construction of earth dams.

“Part of the plan that the NEC laid out is called the livestock transformation plan. All the governors in the frontline states are also involved in this and I think that one of the important points that emerged is to ensure that there is a need for us to create some access to grazing areas.

“I think that is the point Mr. President is trying to make,” he added.

He cited that wherever cattle are, there should be access to a ranch, earth dams, water among others. Thus, whichever state that is willing would pull resources together to build ranches or grazing areas where the pastoralists would pay appropriate fees and return to the north thereafter.

“That was an interim phase. As time goes on, we will eventually be able to stop grazing from one place to another but that will take time,” Osinbajo stated.

Reacting to perceived misconceptions that President Buhari is biased due to his clear passion for the livestock, Osinbajo emphasised inability of the federal government to determine activities of the states, stressing that the states do have right to pass a law on the use of their lands.

The VP further identified desertification as the major cause of the crisis between farmers and herders, with clear attribution to climate change.

To address the lingering crisis, which he, (Osinbajo) agreed was getting worse, he listed the Great Green Wall project as federal government policy designed to mitigate the impacts of desert encroachments as well as efforts to recharge the shrinking Lake Chad.

However, an investigation conducted by The ICIR revealed that the said great green wall project was not doing any better but more of wasted efforts due to poor community ownership and corruption.