We Have Arrested 400 Fulani Herdsmen And Sent 40 To Jail, Ortom Boasts 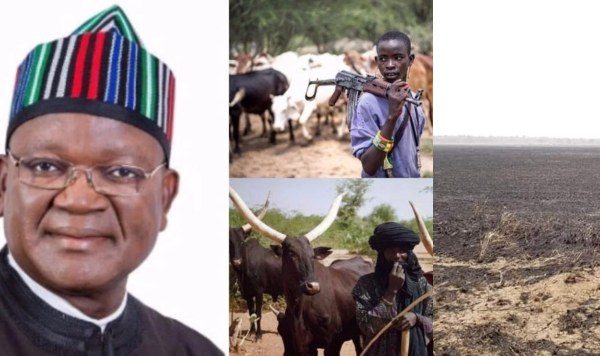 Governor Samuel Ortom of Benue State has stated that citizens of the state should put their mind at rest over the viral rumours that the Federal Government has concluded plans to use its executive power in the 2019 general elections.

Ortom spoke at the orientation workshop organised by the Bureau of Local Government and Chieftaincy Affairs in the state for the council of chiefs and traditional rulers. The governor noted that the state might was mightier than federal might and promised to personally go round every nook and cranny of the state to supervise the elections.Ortom who said that power comes from God noted that he was ready to leave if he lost the coming election as long as the election was free and fair.He also dismissed the report that he was fond of attacking President Muhammadu Buhari.The governor said that contrary to the report, he prayed for the President every day.

Speaking on the anti-open grazing law, Ortom said there was no amount of intimidation that would stop the law.“There is no amount of intimidation that will stop the anti-open grazing law, it is already in force, there is no going back.“Any chief who allows herdsmen to graze openly in their domain is causing problems for himself because if our forefathers had caved in into the antics of these people, they would have taken over our land.“We have arrested over 400 herdsmen, convicted over 40 herdsmen; if you are in doubt, go to the prison, you will see them there.”He added, “Any cattle we see roaming the street would be impounded. Recently, we impounded some cows, the owners came and paid over N300,000.00, another paid over N400,000.00; also one of them paid  N600,000.00.

“I have challenged the Presidency to show me any better alternative to ranching but till now no one has come out with a better option to ranching.“They have been talking of federal might, don’t be deceived, there is no federal might that is greater than state might; it is you people in the state that can determine what happens in the state, when the time (elections) comes. I will go round the state and supervise the elections.”The governor enjoined the traditional rulers to join hands with his government to ensure that peace reign in the state.

What do you think about the Benue State Anti-grazing law ? Share your views below