SORRY APC! OPC Refutes Endorsing Sanwo-Olu And Others For Election 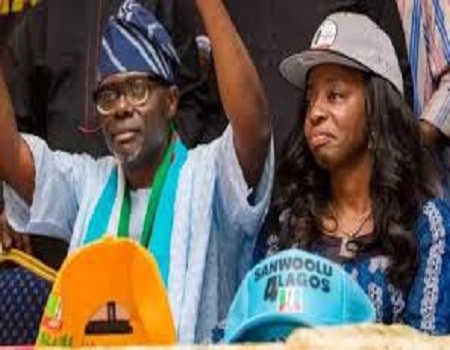 Contrary twist has emerged just a day after the news of the alleged endorsement of the Governorship candidate of the All Progressives Congress, APC in Lagos by the Oodua Peoples Congress, OPC.
This comes as faction of the OPC led by Aare Onakakanfo Gani Adams, has dissociated itself from the reported endorsement of the candidates of the All Progressives Congress (APC) in the South West zone for the forthcoming general election. As reported in some newspapers, the late Dr Frederick Faseun-led of the group had, on Thursday, endorsed the Lagos State APC governorship candidate, Mr Babajide Sanwo-Olu and the other candidates of the party in the zone for the elections.
However, the Lagos State coordinator of OPC, Alhaji Mutair Adesina, in a statement made available to Saturday Tribune, said the group, under the leadership of the Aare Ona Kakanfo, was yet to decided on the candidate it would support for the elections, both at the state and national level, adding that it would take a decision at the appropriate time.
He expressed surprised t the manner in which the late Faseun-led group was handling political issues and described its endorsement of the APC candidates as “barbaric, especially at a time when the remains of the founding father of the group is yet to be laid to rest.

“In Yorubaland, we give respect to the dead and the memory of our great leaders. It is unfortunate that the group has failed to respect the memory of the late Faseun who died just a few weeks ago and that is too bad.
“We are yet to make up our minds on the candidates we will support during the forthcoming elections. Our leader has final say and we are yet to hear from him. The APC candidate is yet to meet with our leader or even pay him a courtesy call.
“So as a group that is poised to promote cultural identity of the Yoruba race, our core values are strengthened by our belief in restructuring, as it has been promoted always by our amiable leader and the Aare Ona Kakanfo of Yorubaland, Iba Gani Abiodun Ige Adams.
“We have our template and structure firmly rooted both in Nigeria and outside the shores of this country. Members of our group are scattered across the country and are in 84 countries across the world. Our core values and ideologies are enshrined in all our programmes.

“So, before we make up our minds, we must consider so many things and key among them is our position on restructuring,” he said.
Therefore, we will definitely bare our minds very soon and, at the same time, throw our weight behind any candidate that is ready to restructure Nigeria,” he said.
What are your thoughts on this story?
2Endorsement of candidatesOPC