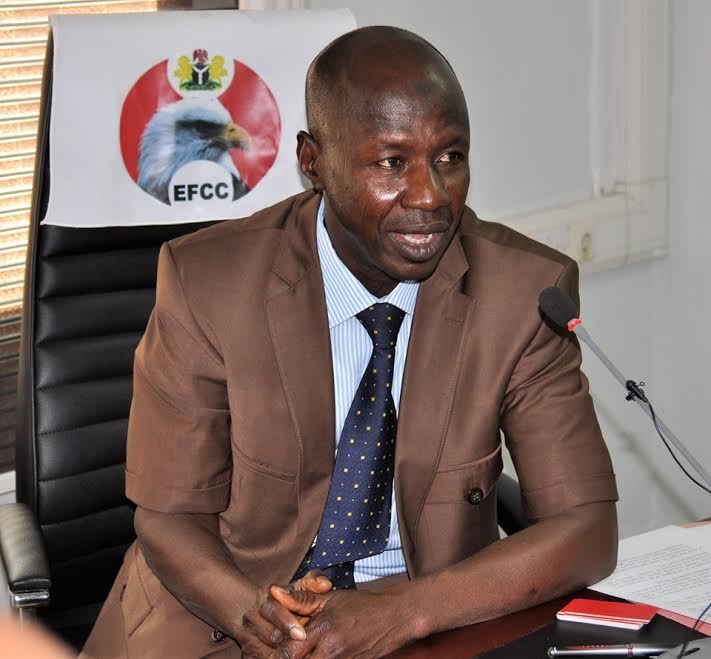 Foremost anti-graft agency  the Economic and Financial Crimes Commission(EFCC), has disclosed that it is committed to make sure more corrupt people are jailed this year .

This was stated by the EFCC acting chairman Mr. Ibrahim Magu,

Magu said the anti-graft agency secured the conviction of 312 persons in 2018 and the agency was targeting double of this figure (624) in 2019.

He said the Commission was committed to intensifying its efforts in order to ensure that it secures more convictions in 2019.

“With 312 convictions in 2018, we are strategising to double our efforts in 2019, as part of our concerted efforts aimed at ensuring that the negative narrative of pervasive corruption in the system is changed for the better, and the perception that some persons are above the law is altered,” he said.

Magu, who was speaking to officers while on a working tour of the Commission’s Lagos office on January 3, noted that the EFCC had already secured three convictions in 2019, which he described as a good start.

“The commission shall continue to rid the country of economic and financial crimes and effectively coordinate the domestic efforts of the global fight against money laundering and terrorism financing,” he added.

Magu stressed that the EFCC remains committed to carrying out its duties “in conformity to best international practices within the ambit of the Law.”

While commending the exemplary leadership of the Chief Justice of Nigeria, Justice Walter Onnoghen, for the success recorded in the past year, he stressed that the Judiciary remains key to winning the corruption fight.

The EFCC boss said, “Let us have it at the back of our minds that we are only prosecutors; without the support of the Judiciary, led by the CJN and other heads of courts across jurisdictions, we could not have been able to achieve the much we did in 2018. Therefore, to be able to double that feat in 2019, let us know that we cannot do without the judiciary.”

He further called for the unalloyed collaboration of other stakeholders, and urged Nigerians to be “more dedicated and determined in reducing corruption to the barest minimum”.

“Those who stole our commonwealth should know that there is no hiding place for them. A high tension searchlight is being beamed on them, it is in their interest to surrender because the game is up”, he said.