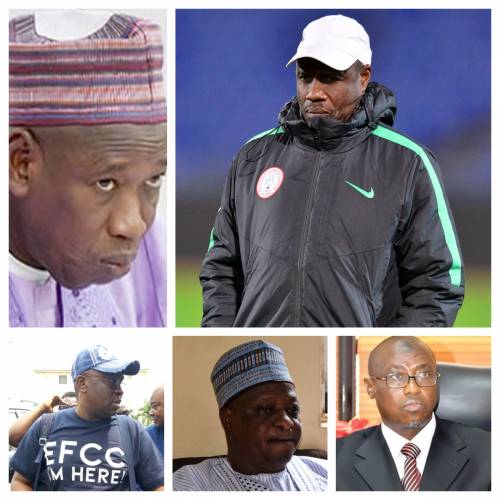 The year 2018 has been an eventful one in all shades. With different events unfolding before our very eyes in Nigeria. Here we present to you some notable cases of corruption that shook our sensibilities.

From the dismissable to the downright jaw-dropping corruption-related incidents, this year has been no less dramatic. From snakes swallowing huge cash to vanishing generators and even monkeys, here are a few interesting corruption stories that trended in 2018.

The Mysterious ‘Snake’ That Swallowed N36million In JAMB Office

Nigeria more or less stood still in the month of February when news broke that a snake allegedly swallowed the sum of N36million from the office of the Joint Admissions and Matriculations Board (JAMB) in Benue State. According to the story, JAMB officials had visited the Benue State office to audit their accounts and discovered the malfeasance. The office clerk, Philomena Chieshie, who was in charge of the revenue generated by the state examination body, could not account for the sum of N36million generated by the state board. She disclosed that the money had been swallowed by a mysterious snake from her office. Not much has been heard of the case ever since.

And Monkeys Came For their Share Of The Millions Too…

While the seemingly outrageous news of millionaire snakes was trying to simmer down, another news broke that a certain monkey had swallowed N70million from the farm of the Chairman of Northern Senators Forum, Senator Abdullahi Adamu. In his remarks on the incident, Senator Shehu Sani, who spoke with newsmen after Senator Adamu was removed as NSF Chairman, said: “I think this country is becoming a huge joke. First of all it was the rodents that drove away the President and we now have snakes consuming about N36million, and you now you have monkeys”.

When Thomas Adedayo resumed as Executive Director of the National Film and Videos Censors Board (NFVCB), many had high hopes for him. However, after several petitions on his high-handedness, Adedayo was eventually arrested for selling a generator belonging to the Lagos office of the Board. He was alleged to have broken the fence to gain access to the store where he carted away the Turban generator worth millions of Naira. Other items allegedly found in his house were plasma tv sets, computers and air conditioners, which were allegedly stolen from the central store in Abuja. He has also been accused of siphoning about N150 million belonging to the board running through cash lodgements in several accounts. Adedayo also allegedly sold official cars while converting other board’s asset for his personal use. He has since been arrested while he is still being investigated at the Alagbon Police Station, Lagos.

President Muhammadu Buhari’s administration scored another low when it was confirmed that the state-owned Nigerian National Petroleum Corotation (NNPC) diverted NLNG funds amounting to N378billion to secretly fund fuel subsidy. This revelation brought to the fore how the current administration had been financing oil subsidy, which it had hitherto claimed as a scam. Aside that, the states and National Assembly were said to have never approved this payment, meaning the NNPC took a unilateral decision against the provisions of the Nigerian Constitution, to use the flush funds to pay for fuel subsidy. NNPC’s GMD Maikanti Baru had written to the President to approve the usage of the NLNG dividend fund to shore up the depleting strategic fuel reserves, as the NNPC could not use its own funds. This had happened at the height of fuel scarcity in the country between December 2017 and January 2018. According to Baru, the NNPC took immediate action on the fund when it got express order from the National Assembly to urgently end the fuel crisis.

Meanwhile, the National Assembly came out to say it never approved the move, stating that the NNPC had said it would take action on the fuel scarcity but never informed it on how it intended to do it. The Presidency has been mum on the issue, while the Group General Manager, Ndu Ughamadu, has described it as a loan taken to save Nigeria from chaos.

NEMA DG And The N33billion Not Satisfactorily Accounted For

Mustapha Mahiaja, the National Emergency Management Agency (NEMA) boss, was indicted in the alleged mismanagement of N33billion North East Intervention Fund. The House of Representatives had called for his immediate sack after investigation revealed that the NEMA boss alongside some other government officials had mismanaged several funds meant for Internally Displaced Persons in the North-East. The House of Representatives Committee on Emergency and Preparedness Response also questioned the process of authorisation for the release of the N5.8billion fund for emergency food intervention in the North-East as well as N3.1billion emergency food intervention in the North-East in 2017 from the Consolidated Revenue Fund Account. Vice President Yemi Osinbajo had approved it when he was Acting President, but the House said the move contravened Section 80(4) of the 1999 Constitution as amended. The investigation revealed that the Nigerian Government lost the sum of N33billion due to Maihaja’s mismanagement but the DG has come out to dispel this claim. According to him, NEMA never received N5.8billion according to the report but only got N800million, while other funds were paid to contractors.

Joshua Dariye And Jolly Nyame Get Conviction After 11 Years

Former governors of Plateau and Taraba states, Joshua Dariye and Jolly Nyame finally secured convictions for corruption-related cases concerning their activities as governors between 1999 and 2007. After 11 years on the case, Reverend Jolly Nyame was found guilty on 27 of 41 counts filed against him by the EFCC for criminal breach of trust by misappropriating the sum of N1.64bn. He was therefore convicted and sentenced to various terms, including a 14-year jail term, which will run concurrently. Barely two weeks later, Justice Adebukola Banjoko, who had convicted Nyame, also sentenced Joshua Dariye to 14 years in prison for criminal breach of trust and misappropriation of state’s funds running into over N2billion. Just like Nyame, his case has been in court since July. Both have since appealed the judgement.

After enjoying years of immunity, Ayodele Fayose, former Governor of Ekiti State, finally submitted himself to the EFCC in his usual dramatic manner. With a blue shirt on which ‘EFCC I’m Here’ was inscribed, he showed up at the EFCC office immediately after the end of his tenure as Governor. He was accompanied by Nyesom Wike, Governor of Rivers State, and Femi Fani-Kayode. The EFCC had been impeded in trying him by the immunity clause Nigerian governors enjoy but now, he is set to answer the many cases that have been filed against him, particularly the N1.3billion he allegedly received from Sambo Dasuki through Musiliu Obanikoro in the run-up to his election victory in 2014. He has also been investigated for several contract scams while in office. In the end, he was charged with 11 counts on conspiracy and money laundering.

In perhaps the biggest corruption story of the year, Abdullahi Ganduje, Governor of Kano State, was seen in multiple videos collecting and pocketing dollars suggested to be bribe from contractors. The Governor has, however, denied the videos’ authenticity, claiming they were staged by his opponents to tarnish his image. Jafar Jafar, publisher of the Daily Nigerian, who released the video, has also been sued. Days after, one of the national dailies, New Telegraph, named Ganduje its ‘Governor of the Year’. President Muhammadu Buhari also described him as one of the best governors in the country when asked about the travails of the Governor. Meanwhile, there has been much back and forth in efforts by the state assembly over possible impeachment regarding the matter. A court in Kano State has also stopped the state legislature from going through with the process.

Salisu Yusuf, a 56-year-old assistant coach with the Nigerian Football Federation (NFF), secured a one-year ban, as well as a fine of $5000 after he was caught on camera making a bribery deal with undercover journalists who had posed as agents of football players interested in securing a place on the national team. He was said to have collected as much as $1,000 as bribe to feature the players in the team.

What are your thoughts to this story?