If You Call Yourself APC Governorship Candidate Again You Will Spend Christmas In Jail, Court Tells APC Guber Candidate 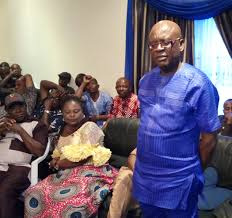 A Federal high court sitting in Abuja has expressed its anger over he actions of  Chief Ikachi Emenike for disobeying the court order by parading himself as the APC gubernatorial candidate when the court already prevent him from doing so.

It will be recalled that the judge, Hon. Justice A. I. Chikere has restrained Chief Ikechi Emenike from parading himself as the APC candidate for Abia state, while the All Progressives Congress (APC) through their national legal adviser have denied knowledge of any other primary election held in Abia state apart from the one that threw up Dr. Uchechukwu Sampson Ogah as the authentic flag bearer of the party in the 2019 governorship election in Abia state, the matter was adjourned till 22nd of January 2019

Information made available to the court suggests that despite the order of the court, Chief Emenike has gone ahead to mount billboards, hold meetings and paste posters parading himself as the flag bearer of the APC in contravention of the court order.

As at the time of filing this report, lawyers to Dr. Uchechukwu Sampson Ogah the authentic governorship candidate of the APC in Abia state has filed a contempt proceedings against Chief Emenike.

Meanwhile it will be recalled that the crisis rocking the Abia State chapter of the ruling All Progressives Congress, APC, was deepened and took an expanded dimension with a chieftain and the factional governorship candidate of the party in the State, High Chief Ikechi Emenike slamming a N1 billion defamation suit against the factional chairman of the party, Hon. Donatus Nwankpa for allegedly slandering him.

Emenike claimed that Nwankpa had in a radio programme in Umuahia, alleged that he and Justice Collinton Okoroafor of the State High Court, Okpuala Ngwa, where the Abia APC leadership dispute is pending, worshipped in an Abuja church shortly after the Judge gave an interlocutory ruling in favour of the Emmanuel Ndukwe faction of the party which Emenike belongs to.