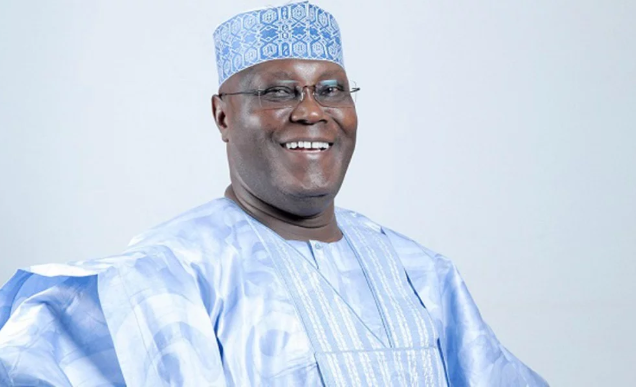 What the APC did to Senator Saraki is what they have also done to Nigeria as a nation. They have degraded our democracy and our economy.

Saraki said “I wish to inform Nigerians that, after extensive consultations, I have decided to take my leave of the All Progressives Congress (APC).”

Speaking on the development, Atiku expressed joy over Saraki’s defection.

According to him ”What the APC did to Senator Saraki is what they have also done to Nigeria as a nation. They have degraded our democracy and our economy.”

He further called on the senate President to join PDP.

I received the news that the Senate President, Senator @bukolasaraki, has resigned from the All Progressives Congress, with great joy.

“I received the news that the Senate President, Senator @bukolasaraki, has resigned from the All Progressives Congress, with great joy.

“I therefore not only welcome @bukolasaraki’s resignation from the APC, I also urge him to go one step further and join the only party capable of enshrining genuine democracy in Nigeria as well as lasting economic progress.

“I urge Senator Saraki to join our great party, the @OfficialPDPNig. May God bless Nigeria and may God bless the PDP,” Atiku tweeted.

Atiku Most Suitable For Presidency ?

The Coordinator of the National Youths Mobilisation (NYM), Hassan Waziri Chinade, has said that the former Vice President, Atiku Abubakar’s presidency would help fix the huge socio-political and economic challenges currently enveloping the country, if elected in the 2019 presidential election.

He stated this at a rally organised by the youth of the six geopolitical zones of the country in Yola, the Adamawa State capital, to drum support for the former vice president.

In a statement issued in Abuja yesterday, Mr. Waziri-Chinade, who is aspiring to the House of Representatives, was quoting as saying that ‘’Nigeria is in an auto-pilot’’ with no one in charge.

“Atiku Abubakar has promised to reverse these negative trends by leading a government that will invest in its people because people constitute the wealth of any nation,” he said.

Even before President Muhammadu Buhari signed the Age Reduction Bill, known as the “Not-Too-Young-To-Run” bill, Chinade said he was not concerned about the bill, as he was busy touring the length and breadth of the Katagum Federal Constituency of Bauchi State.

He added, ‘’While welcoming the Age Reduction Act, why should I be bother about the bill, when I know that great men like Alhaji Yusuf Maitama Sule of blessed memory became a member of the Federal House of Representatives at 24 and became the Minister of Mines and Power under the government of Alhaji Abubakar Tafawa Balewa, my own compatriot from Bauchi at age 29,” he said.

Humbled by the tumultuous welcome and reception in Jalingo in continuation of my nationwide consultation. My delegation and I are eternally grateful to the People and Government of Taraba. #AtikuInTaraba

‘’At that considerably young age, Shagari held the position of several ministries including Commerce and Industry, Economic Development, Pensions, Finance etc. So why should I wait for the signing of the Age Reduction bill to achieve my political ambition”.

Power to the People! #AdamawaPDPMegaRally

A Bauchi State born politician, Chinade, is not regretting his long wait to crack at a political contest, but was rather going through mentoring and learning curve under ‘’the aegis political mastermind, Atiku Abubakar who won the gubernatorial race to Adamawa government House in Yola’’, but was ‘’whisked’’ into the Vice Presidency by President Olusegun Obasanjo in 1999.

According to him, “I have learned the ropes and now ready to go after a sound tutelage from the master himself and that is why I am on the go and pushing hard to get into parliament even at my older age of 41”.

Hassan Chinade said that he would unleash the political lessons he learnt from his master by giving his opponents a run for their money.

I just arrived Sokoto in the company of PDP National Chairman, Prince Uche Secondus; BoT Chairman Amb. Jibrin Walid; former Gov of Jigawa, Sule Lamido and other party chieftains to pay our condolences over the killings in Gandi, Rabah LGA.

He said his major task is to ensure that he wins the seat for Katagum people and also ensure that Atiku Abubakar becomes the President of the Federal Republic of Nigeria next year.

The National Youths Mobilization (NYM) has adopted former Vice President Atiku Abubakar as its candidate for the 2019 presidential election.

National coordinator of NYM, Hassan Waziri Chinade, said the decision to adopt Atiku followed a rally organized by the youth of the six geopolitical zones of the country in Yola, Adamawa State.

“Nigeria is in an auto-pilot with no one in charge,” he claimed.

Chinade said, “Atiku Abubakar has promised to reverse these negative trends by leading a government that will invest in its people because people constitute the wealth of any nation,” he said.

Today, I commissioned the second outlet of the quick-service restaurant of the Chicken Cottage brand, in Yola, Adamawa State. – I recall that at the Commissioning of the first outlet in Jabi Lake Mall in Abuja last year, our vision was to open several other outlets as one of the contributions of my family to reduce unemployment in Nigeria. I am delighted that this vision is gradually coming to fruition. #AtikuMeansJobs

2019: How I defeated Saraki, Kwankwaso in online presidential poll – Atiku

Atiku, who is seeking the ticket of the PDP ahead of the 2019 ‎general elections said in a statement on Wednesday by his Media Office that ‎the poll was conducted in the wake of mass defection of APC members to the PDP, including those eyeing the opposition’s presidential ticket.

“In the Twitter online poll, which ended on Tuesday, Atiku Abubakar polled 42 percent compared to Saraki’s 37 percent and Kwankwaso’s 15 percent with the other candidates settling for 6 per cent of the votes.

“The poll was conducted on the heels of the defections of a sizeable number of Senators and members of the House of Representatives from the ruling APC to the PDP ostensibly to gauge the popularity of the defectors with presidential ambition versus Atiku as far as the PDP ticket is concerned.

“Kwankwaso, who is known to have presidential aspiration decamped to the PDP on Tuesday along with several others. However, Saraki has not defected to the opposition party though there are indications that he will follow suit. Atiku had earlier in December of 2017 rejoined the PDP, a party he had helped found at inception in 1998.

“Voters were asked: ‘Who will emerge the PDP candidate for 2019?’ The choices were listed as Bukola Saraki, Atiku Abubakar, Rabiu Kwankwaso and Other (Reply with name).

The weapon to fix this great nation is not one purchased from a foreign government, but one that is found within each and every one of us – the weapon of pride and an unyielding desire to work and succeed. If we allow this weapon to reach its maximum potential by empowering our labour force then we would have set the standard for a rebirth that will unite us, protect us, and get Nigeria working again. #WorkersDay – For full text, please see link in my bio.

“This is one in a series of polls in which Atiku has come out tops. In a massive online poll that attracted almost 30,000 votes, Atiku vanquished President Muhammadu Buhari and other likely PDP contenders – Governors Ibrahim Hassan Dankwambo and Aminu Tambuwal of Gombe and Sokoto states respectively. The poll was conducted by Senator Ben Murray-Bruce.

“In answer to the question ‘If the 2019 Nigerian Presidential election were to hold today and the candidates are as below, who would you vote for?’, 44% said they would vote for Atiku Abubakar. This compares to 31% for President Buhari, 17% for Dankwambo and 8% for Tambuwal.

“This result is also consistent with a number of recent polls, including those done by well known supporters of President Buhari, who had following the third anniversary of the administration on May 29 initiated polls ostensibly to test the popularity of the incumbent President,” the statement by Atiku media team said.