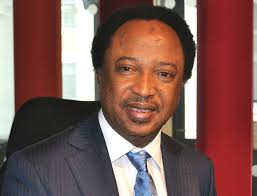 Shehu Sani (born 29 October 1967) is a Nigerian senator,an author, playwright and a human rights activist. He is President of the Civil Rights Congress of Nigeria – (CRCN). and the Chairman of Hand-in-Hand, Africa. He was a leading figure in the struggle for the restoration of democracy in Nigeria. He has been arrested and jailed by past successive military regimes in Nigeria. He was released from life imprisonment when Democracy was restored in Nigeria in 1999. He contested and won the Kaduna Central Senatorial District on the platform of the All Progressive Congress on March 28th, 2015.

Early life
Sani was born on 29 October 1967 in Tudun Wada, Kaduna. He had his primary schooling at Local Government Education Authority (LGEA), Badarawa, and Kaduna between 1975 and 1980. He enrolled at Government Day Secondary school, Kagara, Niger State (1980–84), and proceeded to Government Science College School, Kagara, Niger State. He gained admission into the Kaduna Polytechnic in 1984, to study Agricultural Engineering up to HND level, in 1993.

Unionism | Activism
During his school days at Kaduna Polytechnic, Nigeria. He was a student union activist. He was Chairman, Central Mobilization Committee of PAN-African Student Organization and President African Democratic Youth Congress. He served as social Director Kaduna State Students Union. Sani came from a Nigerian middle-class family. His father was a production manager. He trained in the UK and Germany and had worked with pro-Northern New Nigerian Newspaper for 30 years. Before that he worked as a printer with the Kano-based Daily Mail. He was also the government printer for Sokoto State from 1976 to 1979.

His father had a well stocked library where he drenched himself and drank from the pool of literary knowledge, especially books on socialism and politics of the left. At that period there was massive inflow of literature from Eastern Europe. The exposure to books helped shaped his thoughts and leftist perception of life, as well as exposing him to the reality and decadence brought to the society by military dictatorship. Sani was equally influenced by his mother,who was a community women’s leader; and the likes of Aminu Kano and the Northern Elements Progressive Union (NEPU) and PRP (Peoples Redemption party) radical politics.

From Kaduna Polytechnic, Sani plunged into national activism. He was introduced into the Campaign for Democracy (CD), Nigeria’s umbrella pro-democracy group by activists like Femi Falana and Beko Ransome-Kuti and thereafter served as the Northern Coordinator and National Vice-Chairman of the group.

He was first detained in July 1993 under the regime of General Babagida. His offences then was that he advocated for the revalidation of the result of the 12 June 1993 Presidential election polls won by the Late Chief M. K. O. Abiola. Sani was charged at a magistrate court, Ibrahim Taiwo Road, Kaduna, for sedition. During the interim government of Chief Earnest Shonekan, Sani was arrested and detained for two weeks and later charged to court for sedition again. During General Sani Abacha’s regime, he was implicated in the 1995 phantom coup and subsequently jailed for life and later commuted to 15 years by the Patrick Aziza Special Military Tribunal that convicted the likes of General Olusegun Obasanjo (later President), Col Lawan Gwadabe (rtd) and Chris Anyanwu and other journalists; his charges were: “Accessory to the fact of treason and managing an unlawful society (the Campaign for Democracy)”. He was detained in various prisons: Kirikiri, Kaduna, Port-Harcourt, Enugu and Aba.

Before his several incarcerations, Sani co-founded the Movement for Unity and Progress and teamed up with other northern progressives such as Col. Abubakar Dangiwa Umar (rtd.), Dr Bala Usman, Mr James Bawa Magaji and Alhaji Balarabe Musa, to fight for the actualization of 12 June annulled presidential election and other causes.

Sani is renowned for providing human rights campaign support to the poor and the disadvantage and in the process had clashed with security agents and other state power-wielders.

During the religious riots in Kaduna in 2000, he was the only human right activist in Kaduna that came out in the heat of the violence to condemn the massacre. In 2005, he was appointed to reshape the civil society in the national conference. Tradition rulers in the conference asked that Shehu Sani be barred from further speaking went he asked for their dissolution because of their pliant support for military dictator in the past. The chairman of the commission, Justice Niki Tobi turned down the call. During the riot in Kaduna, he pioneered the distribution of relief materials and initiated the visit to the “war zone” at the time when it was the most suicidal thing to contemplate.

Politics
In 2003, Sani contested for the Senate under Alliance for Democracy (AD) and lost to Senator Muktar Aruwa of the All Nigerian Peoples Party ANPP
In 2011, he contested for the senate under Congress for Progressive Change (CPC) and lost to Senator Sani Saleh in the primaries.
In 2015, Sani won the senate seat after defeating Senator Sani Saleh in the primaries and defeated Senator Muktar Aruwa in the General Election.
On 4 September 2015, he became the first and only Nigerian Senator to declare his assets publicly.