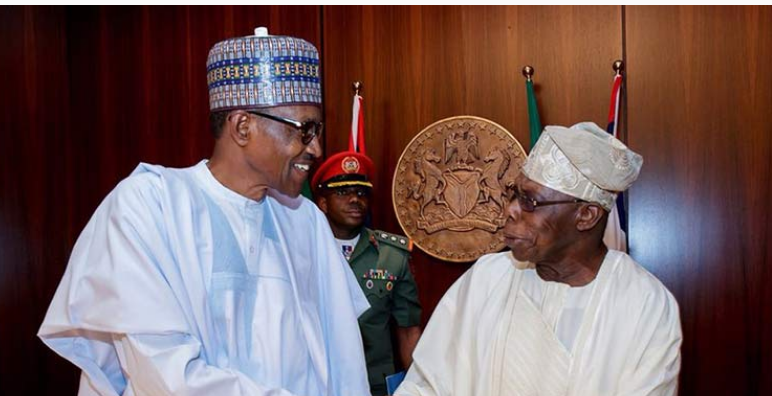 Former President, Chief Olusegun Obasanjo, Wednesday lampooned the President Muhammadu Buhari led administration, saying that the government is at the moment confused in addressing the mirage of problems and challenges confronting Nigeria as a country, just as he warned that if serious action was not taken, they would be the death knell to the country’s democracy. According to Obasanjo, the Buhari government has gotten to the end of its tethers and the nation at present is being left divisively and perilously to drift.

Speaking in Abuja as the Special Guest at a one- day Extra Ordinary Summit of Leaders and Elders of Nigeria convened by the Northern Elders Forum (NEF), Afenifere, Ohaeneze Ndigbo, Pan Niger Delta Forum, the former President while taking a swipe at the government, said that Nigeria, in recent times, has not been so divided along religious and regional lines as at today with what he termed, inexcusable killings and devastating poverty and with government’s wringing hands and apparently incompetent to stern the tide except giving one unrighteous and unacceptable justification after the other.

If there is any former president that has remained relevant in Nigeria’s political landscape, it is Chief Olusegun Obasanjo. After becoming the country’s first democratic president in the Fourth Republic in 1999, he spent two consecutive terms and bowed out in 2007 following a reportedly failed Third Term Agenda. Since then, Obasanjo has remained relevant in Nigeria’s politics, especially in the emergence of successive presidents. It is popularly believed that Obasanjo influenced the emergence of the late President Umaru Yar’Adua (2007-2010), former President Goodluck Jonathan (2010-2015), and President Muhammadu Buhari (2015-date).

Speaking of his endorsement of Buhari, Obasanjo had on February 11, 2015, at the launch of his autobiography titled, My Watch, in Nairobi, Kenya, stated that Buhari, who once ruled Nigeria between December 1983 and August 1985 as a military head of state, was aware of the country’s challenges and had the requisite skills to tackle them.

“The circumstances he (Buhari) would be working under if he wins the election is different from the ones he worked under before, where he was both the executive and the legislature. He knows that. He is smart enough, he is educated enough. He’s experienced enough. Why shouldn’t I support him?” Obasanjo had asked.

Five days later, on February 16, 2015, in a theatrical manner, Obasanjo quit his party, the Peoples Democratic Party, directing a ward leader in the party to tear his membership card publicly in Abeokuta, Ogun State.

However, less than a year after supporting Buhari to win the 2015 presidential election, Obasanjo dropped a hint that he wasn’t impressed by Buhari’s performance in office, especially in economy and foreign affairs.

At the third International Conference on African Development Issues held in May 2016 at Ota, Ogun State, the former president criticised Buhari’s handling of the anti-corruption war, describing it as lousy.

“I fought corruption. We recovered over $1.25bn from Abacha and his men. We didn’t make noise. Also, we recovered £100m and about N30m and those who were helping us, the lawyers and the rest, said there was still at least $1bn to be recovered at that time,” he said.

Afterwards, Obasanjo has been reiterating his views about Buhari’s “poor” performance in economy and foreign affairs in several local and international press interviews.

On January 23, 2018, he wrote an open letter to Buhari, describing the latter’s administration as characterised by poverty, insecurity, poor economic management, nepotism, gross dereliction of duty and condonation of misdeed.

He had then asked Buhari not to seek re-election in 2019, saying, “President Buhari needs a dignified and honourable dismount from the horse. He needs to have time to reflect, refurbish physically and recoup, and after appropriate rest, once again, join the stock of Nigerian leaders whose experience, influence, wisdom and outreach can be deployed on the sidelines for the good of the country.”

Obasanjo had also in the letter hinted at the formation of a Third Force, a movement that would ensure that power is not returned to either his former party, the Peoples Democratic Party, or to the Buhari-led All Progressives Congress in 2019.

Of course, Buhari rebuffed Obasanjo’s counsel, as during the APC’s National Executive Committee meeting on April 9, 2018, he declared his intention to seek contest in 2019, ending all speculations whether he would seek re-election or not.

Since then, Obasanjo’s spate of criticism of the Buhari administration has not fizzled out, with the former president describing the incumbent’s government as a failure at a point.

Buhari had criticised his critic at the Presidential Villa, Abuja, while receiving members of the Buhari Support Organisation led by the Comptroller-General of the Nigeria Customs Service, Col. Hameed Ali (retd.).

On the $16bn allegedly spent by Obasanjo on power projects, the House of Representatives had in 2008 described it as a colossal waste.

In 2016, the Socio-Economic Rights and Accountability Project called for an investigation into the expenditure.

However, Obasanjo has denied spending $16bn on power projects, saying only $6.3bn was issued by his government at the time.

This amount, he said, was spent largely on turbines, building of bridges on which the turbines would be ferried, compensation for communities from whom acres of land were acquired, among others.

The former president also said the allegation that he spent $16bn had been laid to rest after an investigation by the National Assembly then.

In their opinions, political analysts have described the ensuing disagreement between Obasanjo and Buhari as “unbelievable”, considering the role the former president played in the latter’s victory at the 2015 presidential poll.

“It’s a good disagreement, though. I think it’s a positive development for the country, particularly for the anti-corruption war,” an Abuja-based political commentator and human rights activist, Dr. Paul Amen-Aifuwa, says.

Amen-Aifuwa’s argument is that now that the two presidents are at loggerheads, it will be easier for Buhari to check every “excess” of the former president while in office.

“If Obasanjo had done any wrong during his tenure, let him be probed. Every past corrupt leader should be probed. Our country wouldn’t be where it is today if every successive government had been bold enough to probe its predecessor,” he says.

But the spokesperson for the pan-Yoruba sociocultural group, Afenifere, Mr. Yinka Odumakin, differs, while suggesting that every criticism that Obasanjo has made of the Buhari-led government is due to his love for the country.

“Why Obasanjo has fallen out with his successors even when he helped them to get to the office is that he criticises them when they do the wrong thing, which of course doesn’t go down well with them,” he says.

According to Odumakin, Buhari’s comment over the $16bn allegedly spent by Obasanjo on power projects has shown that the incumbent president launches his anti-corruption war only on those who speak against him.

“But of course, if Obasanjo committed anything wrong while in office, nobody is saying there shouldn’t be any form of accountability.”

A political pundit and former aide to ex-President Jonathan, Reno Omokri, also believes that Obasanjo’s criticisms of President Buhari and every other former president show  that he values the country more than his relationship with them.

“It shows that Obasanjo loves Nigeria more than he loves his relationship with the incumbent. Obasanjo has done more for Nigeria both in peacetime and wartime more than any other head of state, living or dead,” he says.

He says if Buhari is bringing up the issue of alleged $16bn power projects now when Obasanjo is criticising him, it only reinforces his stand that the Buhari-led administration’s anti-corruption war is a mere “anti-opposition war.”

“The question that discerning Nigerians should be asking is: Why is Buhari bringing this up now? If he knew Obasanjo was a crook, why did he have a bromance with him at the beginning?” he asks.

In spite of the disagreement between the duo, a lawyer and political scientist in Port Harcourt, Rivers State, Pearl Tariowei, advises the citizens not to be distracted, saying there is never a permanent friend or enemy in politics.

“If the two of them saw themselves right now, they would still embrace themselves and discuss issues. Remember that after Obasanjo’s letter to Buhari in January, they still met at an event in Ethiopia and laughed together. It’s not worth dying over any Nigerian politician,” she says.

The former president and the incumbent had met at the 30th African Union Summit in Addis Ababa, Ethiopia, exchanging pleasantries, having a brief discussion, and thereafter posing for photographs.

“If our leaders only knew that positive criticisms, no matter where they are coming from, were healthy for our democracy, they would be happy to receive such. Then, this country would be geared towards greatness. I hope the day of realisation of this fact comes,” Tariowei adds.