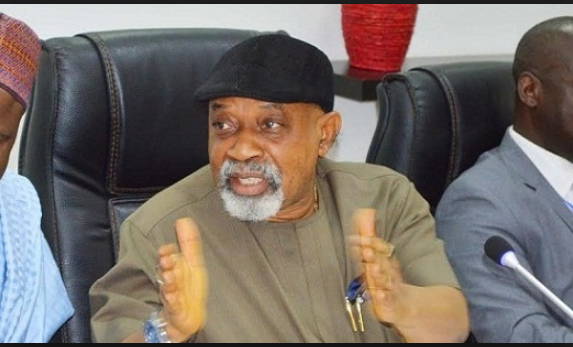 The Administrative Panel of Enquiry, which probed the N62 billion scam at the Nigeria Social Insurance Trust Fund (NSITF) on Wednesday submitted its report to the Minister of Labour and Employment, Dr Chris Ngige.

Mr Ishaya Awotu, the Chairman of the panel said that there were irregular allowances totalling N5.7 billion paid to staff and management. “These allowances were paid without the approval of National Salary, Incomes and Wages Commission.’

Some of the allowances were Management Staff Allowance, Staff Education Allowance, DSTV Subscription Allowance, and Dressing Allowance. The others were generator and motor vehicle fuelling allowance which were not provided for in the Condition of Service of the fund.

He said the panel observed that between 2013 and 2017, the internal Audit Department of the NSITF did not audit the cashbooks of the various bank accounts at the headquarters. The chairman also explained that the lack of effective auditing of the Fund’s accounts and records violates section 1701 of the Financial Regulations.

“There were several transfers of funds in bank accounts without authorisation and approvals.

“Evidences to show the approvals and payment vouchers authorising the transfers were not presented to the panel. The panel observed that N2.990 billion was expended on computerisation and other related lCT equipment. Despite this expenditure, not (much was achieved on computerisation of the Fund, defeating the purpose of the expenditure,” he said.

He, however, added that the sum of two billion, six hundred and fifty million, seven hundred and thirty-one thousand, two hundred and twenty-five naira, and ninety-three kobo were deducted from various payments. He noted that this was in respect of withholding Tax, Pay-As-You-Earn (PAVE), Value Added Tax, Pension and National Housing Fund were not remitted to the relevant authorities. In his reactions, Ngige said a committee would be set up to implement the report of the committee.

According to him, anyone indicted will be prosecuted. “This is not my report, but a report of the Federal Government of Nigeria. Those findings, especially about oversea trips which are unauthorised will be dealt with. Because they are actions that breached public service rules. It is not true that parastatals are exempted from public service rules. This report will be fully implemented and areas of lapses corrected. Many government organisations have gone under because of situations like this,” he said.

The Minister explained that while the Economic and Financial Crimes Commission (EFCC) was already handling the criminal aspects of the infractions, it was necessary to investigate the entire scandal, administratively.  “The EFCC had discovered various acts of fraudulent diversions from the Federal Government and private sector contributions amounting to N62.3 billion as at 2015, allegedly perpetrated by the past board and management staff of NSITF,” he stated.

A statement by Director, Press at the Ministry, Samuel Olowookere, indicated that EFCC was already prosecuting the former Managing Director, General Manager, Legal and the Deputy General Manager, Finance and Accounts of the Fund.

According to him, the Minister lamented that no accounting audit report and returns had been done in the organisation since 2013 in blatant breach of the Act establishing the fund. “On assumption of duty in November 2015, I requested for the audit report to enable my office render same in my annual report to the President as required by Section 30 of the NSITF Act, CAP. N88, Laws of the Federation, 2004, but no feedback was given on the matter in 2015, 2016, and even 2017. All efforts made in this direction were frustrated. In 2017, I specifically requested the Auditor General of the Federation to conclude periodic audit check as required by Section 85(4) of the Constitution. This yielded no result as the officials of NSITF gave no cooperation to the Federal Government auditors,” Ngige said.