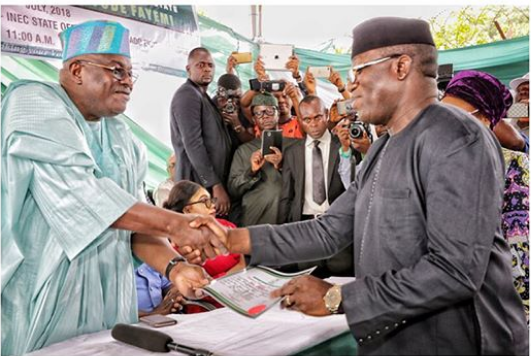 Ekiti State Governor-elect, Dr Kayode Fayemi, on Wednesday assured that he would not disappoint people of the state who gave him their mandate in Saturday’s governorship election. Fayemi gave the assurance in Ado-Ekiti shortly after he received the Certificate of Return as the governor-elect from the Independent National Electoral Commission (INEC).

The INEC National Commissioner in charge of Oyo, Ekiti and Osun, Mr Adedeji Soyebi, presented the certificate to him at the commission’s office, Ado-Ekiti. The Deputy Governor-elect, Otunba Bisi Egbeyemi, also received his Certificate of Return at the ceremony. Fayemi said that the people of the story would enjoy the benefit of good governance from Oct. 16 when he would take over power. He commended INEC for doing what he described as “excellent job” in the conduct of the governorship poll.

Aiyegbaju is Election Ready!!! No propaganda No Lies This is Real!. The people know what they want They are Ready!!! The Change has begun #JKF4Governor #JKFcampaigntrail #votefayemi

Contrary to the claims of ruling Peoples Democratic Party (PDP), Fayemi said that the Saturday election was “seamless, free, fair, credible and violence-free”. He stressed that INEC did a good job in delivering the election in a credible and professional manner in spite of fears expressed in the build-up to the poll. The governor-elect also commended security agencies for their services during the exercise, saying that their presence gave the electorate confidence to come out and exercise their franchise.

He hailed the APC National Working Committee (NWC) led by the National Chairman, Mr Adams Oshiomhole and the Executive Committee of the party in Ekiti led by the Chairman, Chief Olajide Awe. He said: “For INEC, the work has just ended and for us, the work has just started. We have a responsibility not to disappoint our people. Ekiti people will see the benefit of good governance by the grace of God as from Oct 16.”

The Resident Electoral Commissioner in the state, Prof. Abdul-Ganiyu Raji, expressed delight that the election was held in spite of the tension that preceded it. Raji commended the people of the state for the maturity displayed before, during and after the election. According to him, Ekiti is moving higher with the outcome of the election.

In his remarks, Soyebi noted that the presentation of the Certificate of Return marked the end of the process of the governorship election in the state. Soyebi, who described Ekiti as a homogeneous state, urged the people to continue being their brother’s keeper.

He said: “Today marks the end of the election in Ekiti State on the part of the commission which is the presentation of Certificates of Return to the governor-elect and the deputy governor-elect. If there are issues arising from the election, there is another arm of government that will take care of that. This is another important day in the history of the state. On behalf of the commission, I congratulate everybody. Ekiti has pointed the way forward in conducting elections in Nigeria.”

kayode Fayemi, (born 9 February 1965) has previously held the office of the Governor of Ekiti State between 2010 and 2014. He resigned as the Minister of Solid Minerals Development on May 30, 2018. He attended Christ’s School Ado Ekiti from 1975-1980 and received degrees in History, Politics and International Relations from the Universities of Lagos and Ife in Nigeria and his Doctorate in War Studies from the prestigious King’s College, University of London, England, specializing in civil-military relations. His research and policy interests include: Democratisation, Constitutionalism, Security Sector Governance, and Regionalism in the Global Contex.

Kayode Fayemi is a former Director of the Centre for Democracy & Development, a research and training institution dedicated to the study and promotion of democratic development, peace-building and human security in Africa. Prior to his establishment of the Centre, he worked as a lecturer, journalist, researcher and Strategy Development adviser in Nigeria and the United Kingdom.

He was Strategy Development Adviser at London’s City Challenge; research fellow at the African Research & Information Bureau in London, UK, reporter with the newspapers, The Guardian and City Tempo, editor of the political monthly, Nigeria-Now, management consultant at Development and Management Consultants and lecturer at the Police College in Sokoto, Nigeria. As a leader of the Nigerian opposition to military rule in exile, he was responsible for the founding and management of the opposition radios – Radio Freedom, Radio Democracy International & Radio Kudirat and played a central role in the opposition’s diplomatic engagements in exile. An account of the process and roles played in the setting up of Radio Kudirat may be found in Fayemi’s book Out Of The Shadows.

JKF interacts with delegates ahead of the primaries. • Let's do it again. • #VoteJKF #JKF4Governor

Kayode Fayemi has lectured in Africa, Europe, the Americas and Asia. He has also served as an adviser on transitional justice, regional integration, constitutionalism, security sector reform and civil-military relations issues to various governments, inter-governmental institutions and development agencies. He was the main technical adviser to Nigeria’s Human Rights Violations Investigation Commission (Oputa Panel), which investigated past abuses and currently serves on the Presidential Implementation Committees on Security Sector Reform, NEPAD and the Millennium Development Goals.

He was technical expert to the Economic Community of West African States(ECOWAS) on small arms and light weapons and United Nations Economic Commission of Africa on governance issues. He is also a member, Africa Policy Advisory Panel of the British Government. At other times he has served as a consultant to the OECD on Security Sector Reform and chaired the Commonwealth Human Rights Initiative’s Committee of Experts on developing guiding principles and mechanisms of constitution making in Commonwealth Africa.

As we set forth today towards our re-election with another rounds of political campaign and in obedience to the Constitution of the Federal Republic 1999 (as amended), Electoral Act 2010 and the guidelines issued by the Independent Electoral Commission, we make the declaration that our vision is clear about the future that we see. The mission is here and we urge all of you to journey with us on this collective mission. #JKF

Kayode Fayemi is a Fellow of the Centre for Peace and Conflict Studies, University of Ibadan, Adjunct Professor of Security Studies at the African Centre for Strategic Studies, National Defense University, Fort McNair, Washington, D.C., USA. He was also a Visiting Professor in the African Studies Programme at Northwestern University, Evanston, USA in 2004. Dr Fayemi serves on numerous Boards including the Governing Board of the Open Society Justice Institute, Baobab for Women’s Human Rights, African Security Sector Network, and on the Advisory Board of the Global Facilitation Network on Security Sector Reform and on the Management Culture Board of the ECOWAS Secretariat.