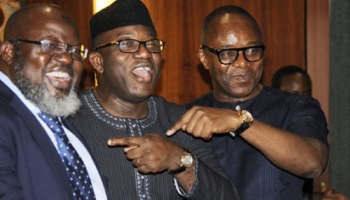 A crisis seems to be brewing in the Ekiti State House of Assembly, as some All Progressives Congress, APC, legislators, yesterday, rejected the adjournment of legislative business till October. This was as the Ekiti State Governor-elect, Dr. Kayode Fayemi was issued a Certificate of Return by the Independent National Electoral Commission, INEC, even as he has assured the people of the state they will enjoy the benefit of good governance as from October 16 when he takes over the reins of power.

Also, the leadership of the Peoples Democratic Party, PDP, has again claimed that the outcome of last Saturday’s governorship election in Ekiti State was not a true reflection of the wishes of the electorate. The minority APC legislators described the long adjournment as illegal and not in the interest of the people of the state who elected them. 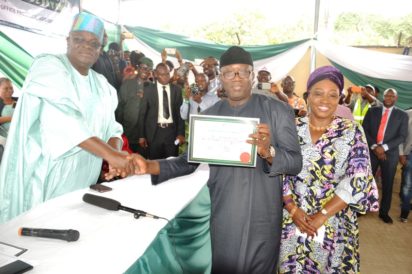 The majority People’s Democratic Party, PDP, legislators in the Assembly had on Tuesday adjourned legislative business till October. The APC Assembly members, led by the Minority Leader, Chief Gboyega Aribisogan (Ikole Constituency 1) alleged that the long adjournment was masterminded by Governor Ayo Fayose in a bid to emasculate the legislative arm. Other APC members of Ekiti parliament are Messrs. Sunday Akinniyi (Ikere Constituency 1) and Adeniran Alagbada (Ise/Orun Constituency.)

Aribisogan, Akinnyi and Alagbada defected from the PDP at different times and joined the APC over the internal crisis that rocked their former party. The 23 PDP legislators led by the Speaker, Mr. Kola Oluwawole at a plenary on Tuesday adjourned plenary till October 8 in protest against the governorship election result and alleged harassment of Fayose and PDP members by security agencies.

The leader of Business, Mr. Tunji Akinyele, who moved the motion for the adjournment, said this became imperative due to the political harassment of members by security agents. But Aribisogan said APC Assembly members are ready for legislative business calling on the Police and Department of State Services, DSS, to give the minority lawmakers security any time they decide to perform their constitutional duties.

Aribisogan said: “That long adjournment was illegal and even the plenary held on Tuesday was illegal because it was Governor Fayose that directed the Speaker to hold that plenary without notice to all members. “It is unfortunate that we still have this executive recklessness going on in Ekiti State. Maybe the Speaker has forgotten that we now have members of APC in the House because we were neither notified nor consulted.”

When asked whether three APC lawmakers form a quorum to perform legislative duties, Aribisigan said: “On our part, we are not on recess; it is only when you are going for plenary that you need a quorum but we can sit at parliamentary, committee and constituency meetings.” Akinniyi said: “It appears the Speaker is living in a fool’s paradise without giving notice to all members of the Assembly. We APC members of Ekiti State House of Assembly are alive to our responsibilities to legislate for the good of our people and perform other oversight functions.

“We have duly informed security agencies that we (APC House members) are ready to continue with our constitutional functions so that anytime we are there, they will give us security.”  Fayemi receives certificate of return Meanwhile, the governor-elect, Dr. Fayemi has been presented with the Certificate of Return as the governor-elect by INEC.

National Commissioner in charge of Oyo, Ekiti and Osun States, Prince Adedeji Soyebi, presented Fayemi with the Certificate of Return at a ceremony held at state INEC office, Ado-Ekiti, the state capital. Also, the Deputy Governor-elect Otunba Bisi Egbeyemi received his Certificate of Return at the event. The governor-elect commended the electoral body for doing what he described as an “excellent job” of conducting the governorship poll.

Contrary to the claim of the ruling People’s Democratic Party, PDP, Fayemi contended that the election which returned him as the winner was “seamless, free, fair, credible and violence-free.” He said: “For INEC, the work has just ended and for us, the work has just started. We have a responsibility not to disappoint our people.”

Our People… Our Strength… #APCNigeria

The Resident Electoral Commissioner, REC, Prof. AbdulGaniy Raji, expressed delight that the election was held despite the tension that preceded it.  PDP insists INEC doctored results in APC’s favour Meanwhile, the PDP after its National Working Committee, NWC, reviewed the results of the election on Tuesday night in Abuja.

In a statement by its spokesman, Kola Ologbondiyan, the party accused the INEC of swapping the original results obtained at the polling units for those it announced to the public. The PDP said: “After a thorough examination of all hard facts, the NWC reconfirms that INEC doctored the result of the election to  favour APC.

“The NWC notes that apart from huge discrepancies between the actual votes cast at the polling  centres  and the results released by INEC, there is evidence that INEC pulled down the original result from its database to accommodate the alterations. “The NWC also has evidence indicating that the original result was in  favour  of the PDP candidate, Professor Kolapo Olusola-Eleka before the figures were altered.

“The NWC after very exhaustive examination of all facts reconfirms that the PDP candidate, Professor Kolapo Olusola Eleka, clearly won the July 14, 2018 governorship election.” The party charged the umpire to “correct the results” and tender an unreserved apology to the people of Ekiti State in the interest of democracy.

Apostle Sulaiman debunks statement on outcome of poll Relatedly, General Overseer of Omega Fire Ministries, Apostle Johnson Suleiman, has debunked reports credited to the Special Assistant to the President on New Media, Mrs. Lauretta Onochie that he prophesied that the APC, would lose last week’s governorship election in Ekiti State. Onochie had quoted Suleiman to have said that God told him that APC was finished in Nigeria.

A statement by his spokesperson, Mr. Phrank Shuaib, said Sulaiman never made such a statement on the social media or anywhere. The statement reads: “The presidency hit a new low on Sunday when Onochie threw all pretences to the wind to rubbish a man of God with her unguarded vituperations and outright spewing of hate. “Isn’t it unbecoming that a presidential spokesperson is propagating an unverified report? The Apostle never made the purported statement being credited to him at any forum and I challenge her to provide a contrary source to the one I just mentioned or produce any shred of evidence to support her claim.”