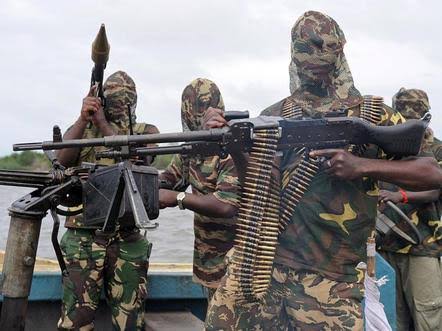 The armed men destroyed the checkpoint and other properties in the area.

A source, who is a resident of Isiokpo community, said, “The incident happened at 12 midnight when the armed hoodlums stormed a checkpoint manned by customs officials in Isiokpo and killed their victims, burnt down cars and went away without any interference.”

While the Rivers State police command has yet to issue any statement on the incident, reports say local vigilantes, OSPAC in the community later arrived at the scene after the hoodlums had finished the operation.
Source – Sahara Reporters Troops of Operation Whirl Stroke (OPWS) were reported to have stormed the palace of two traditional rulers in Ukum local government area of Benue State on Saturday.

The district head of Cha(Mue Ter Cha), H R H, Chief Utambe Adzer was reportedly arrested while Chief Teran Kwanghbo was said to have escaped through the backdoor of his palace.

According to military sources, the troops stormed the palaces of the monarchs based on intelligence reports.

The escaped district head was said to have left his palace when the report reached him that his colleague had been arrested.

The source further disclosed that one Ak47 assault rifle, one mag, 20 rounds of 7.62mm ammunition, one locally made mortar tube, and one vehicle were allegedly recovered from Chief Utambe Adzer.
Source – Tribune