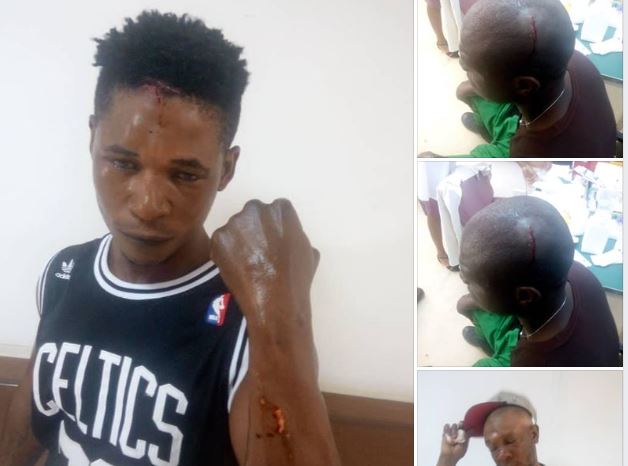 Inno Kalimanshi from PF’s GBM team after being clobbered and panel beaten by fellow PF thugs from Intercity. This happened earlier when they were attacked by fellow cadres from same party, the case has now risen like a wild fire.

When the UPND and other progressive citizens and organisations called on President Edgar Lungu to tame his violent Patriotic Front cadres as they were a danger to the rule of law, he accused us of being bitter and ignored our cry.

When we told Edgar Lungu to start by taking punitive action against his own violent cadres, his cabinet ministers and party officials pointed an accusing finger at the UPND as being violent.

When the Zambia police took action against PF cadres that created confusion in the Sesheke by-election, President Edgar Lungu reacted by firing the police officers that maintained law and order, thus instilling fear in the men and women in uniform.

When we advised President Edgar Lungu and the PF that they were creating a monster that would one day come to bite them, they did not listen but instead encouraged the gun culture among PF cadres.

When the UPND and other progressive citizens and institutions advised the Zambia Police to arrest the thugs that attacked an audience that was debating constitutional amendments at Hotel intercontinental, we were told there was no complainant in the case.

Yesterday’s confusion rests right on the President’s back and we expect to see action from him.We expect nothing but either action against police top brass or arrest of the PF violent cadres.

This is unheard of in our country and we demand for immediate action before Zambians lose complete confidence in the man they call their President.

We cannot have cadres shedding blood in the presence of President Lungu and not even a single arrest made. This is absurd and a sign that indeed the police are afraid of the cadres. The police say that they are carrying out investigations. What furthermore investigations does Police Commissioner Nelson Phiri want to carry out when the crime was committed right in their faces. We demand for order and a return to normalcy in our country.