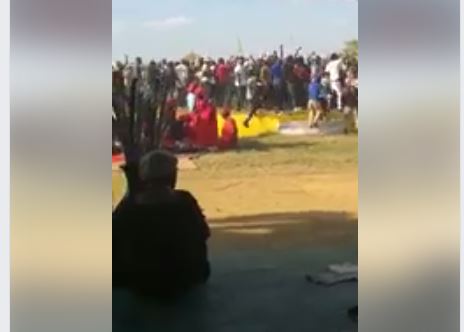 The cadres in their hundreds arrived at the ceremony of the Soli people of senior chieftainess Nkomeshya Mukamambo ll in a convoy of mini buses.

On arrival, the mob of chanting male youths headed straight to the food-serving tent, grabbed seats and positioned themselves in the main arena under the coconut tree.

The attention of ceremony’s activities had now shifted to the ruling party youths causing disruption to the programme.

“This is our traditional ceremony, for the Soli, not a political function for cadres. How can they send them to come and disturb us? For what? They just came from nowhere and started threatening people in the kitchen.” an organiser said.

The Lusaka Province UPND chairman says PF thugs are now completely uncontrollable and when hell breaks loose even PF supporters and government officials will be affected like what was witnessed in Chongwe.

The PF cadres have now become a force to be scared of, causing unnecessary chaos any and everywhere they walk past.

Feel free to drop your comments and views below.

This story first appeared on Zambianobserver.