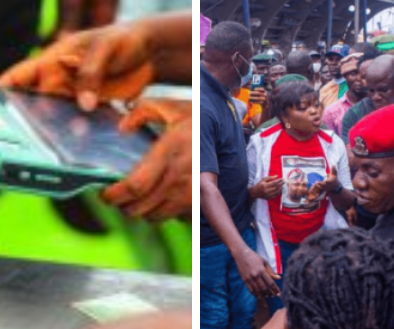 Controversy Trails Alleged Storage Of BVAS Machines In Govt House
Chairman of Inter-Party Advisory Council (IPAC) in Cross River State, Mr. Anthony Bissong Attah, yesterday staged a walkout from a meeting that was convened by the Independent National Electoral Commission (INEC) and the state police commissioner, who was represented by the deputy commissioner of operations, Mr. Frank Idu. The meeting was convened by INEC’s state resident electoral commissioner, the REC, Prof. Gabriel Yomere to address the claims by online news publications that BVAS machines belonging to the commission were stored at Cross River State government house.
Before quitting the meeting, the IPAC chairman stated that until he was given access to the bar code of BVAS machines, he won’t have confidence in the operations of INEC. The REC however, stated that BVAS were part of the sensitive materials of INEC that are not to be presented to political parties nor members of the public.
He dispelled rumour that the BVAS were stored in government house and charged members of the Public to disregard the fake news circulated a week ago on some online news platforms that the BVAS were kept at Cross River State government house.
The REC threatened to resign his appointment if it is established that any BVAS is missing, adding that there were 3,281 BVAS that are still intact.
Source: Leadership

Hoodlums chase Funke Akindele out of Lagos market, Jandor fumes
The governorship candidate of the Peoples Democratic Party, PDP in Lagos, Abdul-Azeez Adediran popularly known as Jandor has alleged that his deputy, Funke Akindele was chased out of Ketu fruit market while one of his supporters was also stabbed on Tuesday. According to the News Agency of Nigeria, Akindele left the campaign after she was chased by hoodlums in the market.
But Adediran’s campaign train and convoy moved round some streets in the council.

In reaction, Jandor while speaking meeting with the council of Chief Imam at the Ketu Central Mosque in Kosofe Local Government area decried incessant attacks on his campaign train by political thugs. He confirmed that his campaign train had come under attack in the council by hoodlums in which one member of his security team was stabbed.

He added that similar situations had happened repeatedly in various local government areas since he kicked off his tour to 245 wards on Oct. 19, 2022.
He said the chasing out of his running mate from of Kosofe Fruit market was not healthy for democracy in the country.
Source: PM News