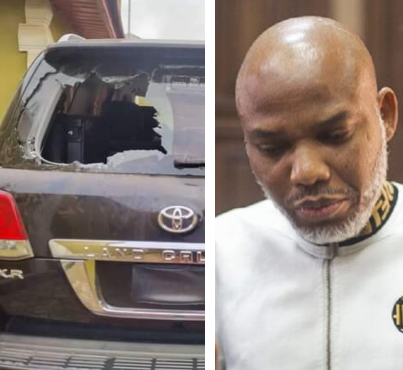 2023: Obi Reveals How He Was Attacked In Katsina
The presidential candidate of the Labour Party (LP), Peter Obi on Tuesday revealed how his campaign was attacked in Katsina State.
Naija News had earlier reported that the campaign team of Obi was in Katsina State on Monday to seek support for his presidential ambition. Obi, during his address at the rally had promised to tackle insecurity if he emerges as president in 2023.

Obi/Datti presidential campaign council in a statement released through its Head of Media, Diran Onifade, said the attack on Obi and his campaign team is condemnable.

The statement reads, “Our candidate had met with women in a town hall and then held a hugely successful Rally at the Muhammad Dikko Stadium. However, on his way to the airport, hoodlums attacked the car our candidate was riding in with heavy stones from his driver’s side causing substantial damage to the vehicle. “To the glory of God, Mr Obi and other occupants of the car were unhurt. Subsequently, another set of thugs also threw stones outside the stadium which damaged several vehicles including that of our official stage crew.”

He noted that the attack may have been carried out by some politicians who think they have the northwest in their pockets but are shocked by Obi’s presence in the region.
Source: NaijaNews Kanu’s international counsel and spokesperson, Fein said the trio should not toe the line of lawlessness if elected the next president of Nigeria, adding that whoever emerges as President Muhammadu Buhari’s successor should respect court verdicts and release Kanu.
Fein made this known in an open letter written to Atiku, Tinubu and Obi, titled ‘RE: Ending Nigeria’s international outlaw status’ as issued by Kanu’s Special Counsel, Aloy Ejimakor on Tuesday.
“You can choose to be a firefighter by pledging, if elected, to order the immediate, unconditional release of Nnamdi Kanu; or you can choose to be part of the fire by refusing the pledge and defiling the rule of law.” part of the letter read.
Source: Vanguard

The South East leader of Miyetti Allah Cattle Breeders Association of Nigeria (MCBAN), Alhaji Gidado Siddiki, who disclosed this in an interview with Journalists in Awka, on Tuesday, said the suspected gunmen stormed the Cattle Ranching hub on Sunday night and shot sporadically into the air to scare residents away before carrying out their nefarious act. He said that the attackers also kidnapped one person, Mr. Usman Haruna in the process leaving the Settlement in total confusion.

According to Siddiki, I was informed by the owner of the hub, Haruna Sale on Monday afternoon that some people suspected to be gunmen have invade his Cattle Ranching and killed his fifteen Cows, kidnapped one of his subjects, Usman Haruna, in the process.

“As it stands now, my people in the area are afraid from their hideout to go out and report to any nearby security outfits and the attack is still ongoing.

He informed the Press that a similar attack also took place on Monday, at about 6 am in Umuochu village-Ndikeli-Onwu, Orumba North Local Government Area of the State but no person or cow was missing in the attack.

He called on the Commissioner of Police, Echeng Echeng, to urgently deployed operatives to the affected areas to prevent further attacks on his people and their businesses.
Source: Tribune