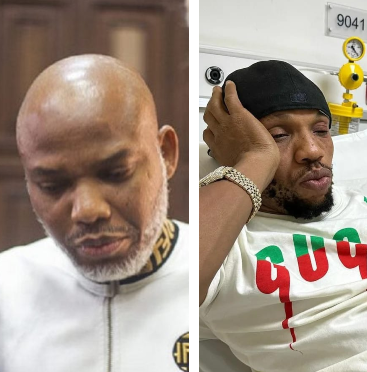 JUST IN: US to list Nigeria as ‘terror sponsor’ over Nnamdi Kanu – Lawyer
The United States (US) Congress has Nigeria targeted for listing as “a state sponsor of terrorism”, according to Bruce Fein, the International counsel for Nnamdi Kanu, the detained British-Nigerian leader of the proscribed Indigenous People of Biafra (IPOB). POLITICS NIGERIA reports that in a statement on Monday night, Fein suggested that Chris Smith, a U.S. Congressman for New Jersey’s 4th District, who is the Chairman of the Subcommittee on Africa, Global Health, Global Human Rights, and International Organizations, is behind the move.

The constitutional and international law expert claimed that the continued detention of his client, Kanu, by the Nigerian government prompted the imminent purported listing — although he provided no details. “The United States Congress has Nigeria targeted for listing as a state sponsor of terrorism to join Iran et al., based on the kidnapping, torture, and extraordinary rendition of MNK (Mazi Nnamdi Kanu) and collusion with Boko Haram,” Fein said.

How Emefiele Evaded Arrest On Arrival At Airport’
The Governor of the Central Bank of Nigeria (CBN), Godwin Emefiele on Monday arrived in Nigeria amidst calls for his arrest.
Naija News had earlier reported that Emefiele returned to the country after his two weeks’ leave abroad elapsed. Emefiele upon his arrival into the country evaded arrest at the airport due to the intervention of one of the Service Chiefs.

There had been speculations that the Department of State Service (DSS) on Monday invaded the CBN headquarters to arrest Emefiele.

The secret police allegedly attempted to arrest him over allegations of terrorism financing and fraud. A source that spoke with Daily Sun, however, stated that the Service Chief got approval for the jet that brought Emefiele back to the country to land at the private wing of the Murtala Muhammed International Airport, Lagos, where military men had been positioned.

DSS operatives were prevented from arresting Emefiele due to the presence of the military men.
Source: Naija News He made this known on his verified Instagram handle. According to the vibrant actor, God saved him from the hands of death.

He wrote: “Thankful for life 🙏🙏🙏Was involved in a car accident on 3rd mainland bridge last night but GOD DID!!! We Asaaaaa still ❤️”
Source: Vanguard