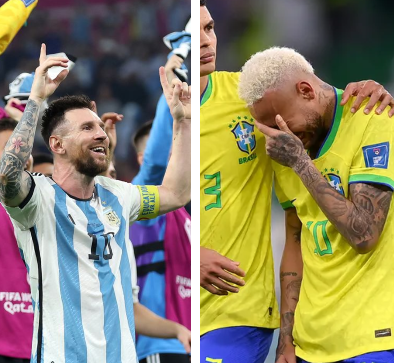 Netherlands VS Argentina
A sensational Netherlands comeback was in vain as Argentina progressed to the World Cup 2022 semi-finals on penalties following a historic 2-2 draw at the Lusail Iconic Stadium. Argentina had one foot in the semi-finals courtesy of strikes from Nahuel Molina and Lionel Messi, but Wout Weghorst came up with two remarkable goals off the bench – including one in the 10th minute of second-half injury time – to keep the contest alive in the most dramatic of circumstances.

No more goals were to be had in the additional 30 minutes, but the Copa America winners held their nerve from the spot to win 4-3 in the shootout and set up a semi-final with Croatia.

Croatia VS Brazil
Croatia spectacularly overcame Brazil on penalties following a 1-1 draw to reach the semi-finals of the 2022 World Cup. The two teams could not be separated at the end of 90 minutes, but Neymar struck for Tite’s side in stoppage time at the end of the first half of extra time to send the South American nation ahead.

In finding the back of the net, the 30-year-old netted his 77th goal for the national side, which drew him level with Pele at the top of the goalscoring charts. However, Croatia were level in the 117th minute through Bruno Petkovic, and the 2010 finalists went on to win the penalty shootout 4-2.

Croatia will now take on either Argentina or Netherlands in the semi-finals of the competition on Tuesday.