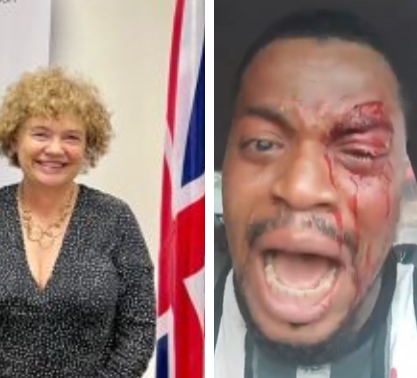 This was disclosed on Wednesday by Catriona Liang, the British High Commissioner to Nigeria, following a meeting, held at a closed door, with the National Working Committee, NWC, of the All Progressives Congress, APC, in Abuja.

Mrs Liang said the UK would work with any candidates who emerge from the election. The High Commissioner also expressed confidence in Nigeria’s democracy and the president’s commitment to organising free and secure elections.

She said: “The UK doesn’t have a preferred candidate. We are committed to free and fair elections, but we will work with whoever the presidential candidate emerges from the election.
Source: DailyPost

Lagos thugs attack Akeem Adeyemi on movie set
Akeem Adeyemi, the Nollywood actor, has been attacked by thugs on a movie set in Lagos.
Wunmi Toriola, an actress, disclosed this via her Instagram page on Tuesday. She said Adeyemi was attacked by “area boys” while he was filming in the Gbagada axis of the state.
Toriola also shared a video wherein Adeyemi is seen with a bloody eye lamenting about the “brutal attack”.
“See what area boys did. To what end. Peaceful filming turned this. Help. Sawmill Gbagada,” she wrote.
Reacting to the incident, Adebayo Salami, the ace actor, revealed that the culprit has been arrested. He also charged the Theatre Arts and Motion Pictures Practitioners Association of Nigeria (TAMPAN) to intervene and ensure the safety of its members.
“This is an unacceptable experience. Though I am glad to know that the culprit has been apprehended by officers of the law, I enjoin the leadership of @tampanglobal to look into this situation as a matter of urgency,” he wrote.
Source: The Cable