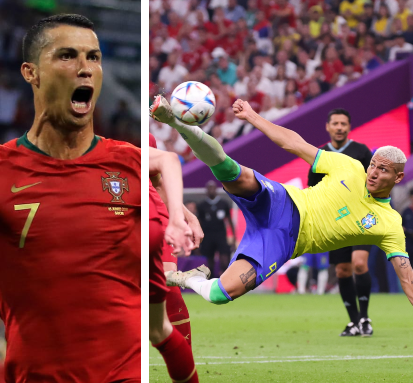 The god of soccer today, shone on embattled former Manchester United star and Portugal point man, Cristiano Ronaldo as he shattered another record by becoming the first player to score a goal in 5 world cup matches.
Ghana also made Africans proud by registering the first goal of the tournament by an African side and also having 2 goals to their names after other African countries played their first games without scoring any.

Brazil displayed some magnificent skills which helped them edge Serbia to secure a comfortable 2-0 win.
Details of how today’s matches went is summarised below.

Switzerland vs Cameroon
Switzerland continued their record of not losing a World Cup opening game in their past five appearances on football’s biggest stage as they edged past a lively Cameroon side in their Group G game. Cameroon-born forward, Breel Embolo scored the winning goal for Switzerland in the first half after winger Xherdan Shaqiri slid a perfect ball across the box.
Cameroon has now lost their last eight World Cup games. They will need to improve in front of the goal if they are to get a positive result in their next game against Serbia next Monday.

Uruguay vs South Korea
A tense game that almost had several late goals but ultimately the sides cancelled each other out with the absence of a goal in both halves.
Uruguay looked better after Suárez made way for Cavani but Alonso was generally outclassed by Bento in the tactical battle. Uruguay has the better head-to-head record against their opponents today, with the previous two meetings finishing in victories for La Celeste.
The two teams last met in the quarter-finals of the 2010 World Cup in South Africa. Uruguay won that fixture 2-1 thanks to a Luis Suárez brace.

Portugal vs Ghana
Goals by Joao Felix, Cristian Ronaldo and Rafael Leão were enough to drown Andre Ayew and Osman Bukari’s goals and get Portugal a comfortable 3-2 win.
With this game, Portugal earned its first win in an opening game of the FIFA World Cup since 2006. The footballing gods shone down on Ronaldo as he broke another record by becoming the first player to score in five World Cups!
After failing to qualify for Russia 2018, Ghana came into the game with hopes of redeeming its image and making an impact in a group that could be conceived as possibly the most difficult of the lot.
Their desperation to get into winning ways came through as the team became the first African country to score at the 2022 world cup.

Brazil vs Serbia
Richarlison’s 73rd-minute stunner was the final hammer on Serbia’s chances of registering a goal in the 2022 World cup.
The Brazilian wonder kid bagged a brace to confirm the south American side’s dominance in the game of football.
Richarlison has now scored 9 goals in his last 7 games for Brazil. In their last five games coming into the tournament, Brazil scored 18 goals and Serbia scored 14. Both topped the scoring charts in their qualifying groups as well.
With a record of winning the world cup 5 times, Brazil comes into the tournament with a charged confidence and an eye to repeat what they are known for… dominating.