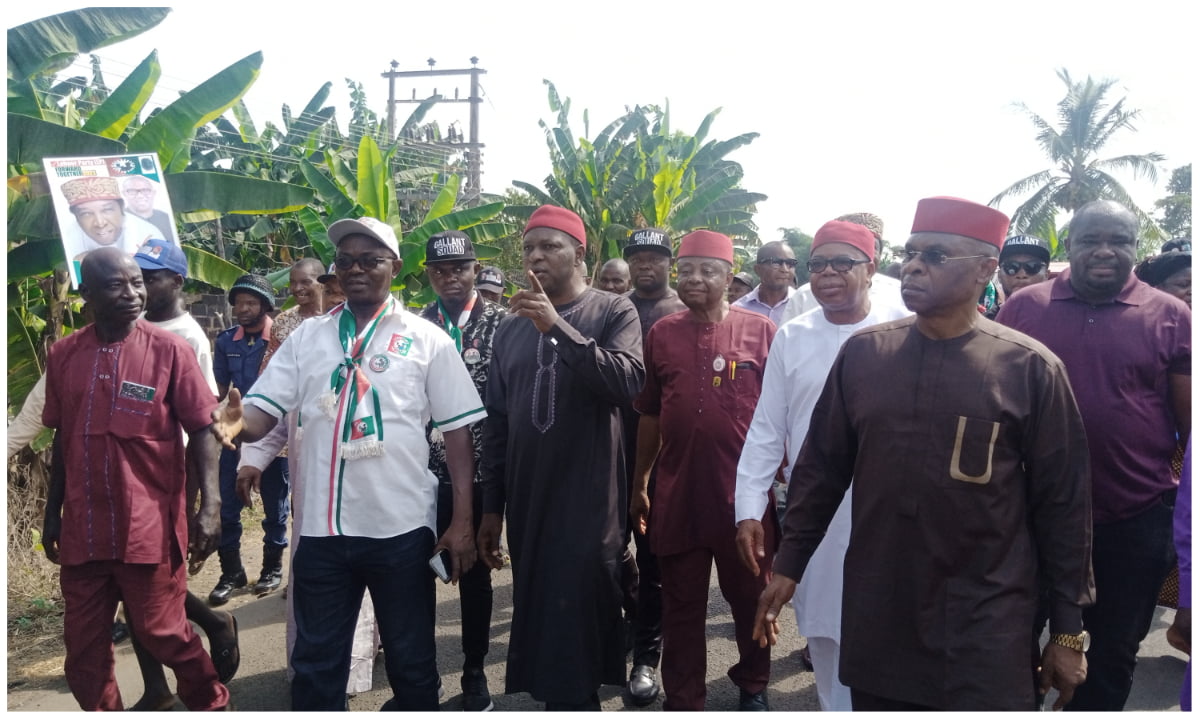 The Labour Party governorship candidate in Enugu State, Hon. Chijioke Edeoga has suspended his planned campaign in some wards in Eha-Amufu, Isi-Uzo Local Government Area of the State. He made the announcement during his visit to the area on Tuesday.

Suspected Fulani herdsmen were alleged to have invaded Eha-Amufu communities again on Monday night and slaughtered many residents, a development that has turned survivors into refugees as they could be seen fleeing homes. Speaking on the development, Edeoga who visited Eha-Amufu Ward 2 and Eha-Amufu Ward 4, said every campaign in the area would be put on hold in honour of those who lost their lives to the unprovoked attack.

“We were to start from Ward 3 but we suspended it because of the killings. We have also postponed campaigns in other communities in Eha-Amufu here. We are so saddened over yet another killing of innocent people in our place. “While we sympathise with the families of the victims, I want to assure you that all these will end when we win this election and are sworn-in by May 29, 2023,” he said.

Edeoga told his audience that his emergence as Labour Party guber candidate in Enugu State was as a result of pressures from well meaning people of the State, as well as the Presidential candidate of the party, Mr. Peter Obi. According to him, “I’m into the race for service. After the PDP primary election, I decided to rest but pressures kept coming from all quarters in Enugu State, women, youths, elders.

“Even Our Presidential candidate, Mr. Peter Obi called me on the phone to come and contest; he said he wants me to fly the party’s flag. I was hesitant until it got to a point that I had no choice but to answer the call.” He urged the people to support his candidature and that of other Labour Party candidates, as according to him, “the PDP has collapsed in Eha-Amufu, Enugu State and South-East. There is so much injustice and lies in the PDP; you can see how they denied Southern Nigeria the presidential ticket; so what are they going to tell us?” The presidential candidate of Action Alliance (AA) and former Chief Security Officer to late military Head of State, Gen. Sani Abacha, Maj Hamzat Al-Mustapha, has accused foreign nations of been behind plots to prolong the Boko Haram insurgency in Nigeria.

Speaking on Tuesday in Abuja at a roundtable about the 2023 general election, Al-Mustapha said while insurgency started in November 1, 1999, it was conceived in 1972 after oil and gas was discovered in commercial quantity in the country. He stated that crisis in African countries like the Democratic Republic of Congo, Mozambique, Libya, among others were caused by Western nations.

According to the aide of a former dictator, western nations are behind chaos in these countries because they have a high deposit of mineral resources. He said that the federal government discovered oil and uranium in large quantities in 1996 in the North-east and North-west, which is now being mined illegally as insurgency rages on.

Al-Mustapha said: “Borno State is a place ordinarily to be feared because of bombs in wrong places alone. But one may ask, NGOs in Borno state, particularly the capital, are too many. Houses for rent are difficult to find. They are renting houses from 10 years and above; 18 years, 20 years. That is to say there is a plan to stay longer. “One may ask why? Who are these NGOs? Who certifies them and send them to Nigeria? How come soldiers and police and all uniform men and women are scared of Nigeria and scared particularly of Borno State.

“How come NGOs are much more friendlier? The weather is not friendly, the weather is harsh. How come they love Borno? How come they don’t go to other peaceful countries with better weather? What are they doing there? One may ask.

“Why are soldiers running away from the locations of Boko Haram? And why are the white men and women going there even at odd hours and coming back and unhindered? Why are we not asking them questions? Is Nigeria a jungle? Do we know who we are? What are the names of these agencies giving them clearances at home? How do they enter Nigeria? Immigration, foreign affairs Internal Affairs, presidency. What are they engaged in?

“What is that lucrative thing that makes them not to be afraid of the danger zone in the eyes of a typical Nigerian? How come a typical Nigerian cannot go to where they go to? How come they hold meetings with these people? How come they have telephones and internet interactions? How come we are not aware? “The question here I ask is: Is it the security managers that are compromising? Or are these civil institutions that are compromising? or is it ignorance? Or is it negligence?”