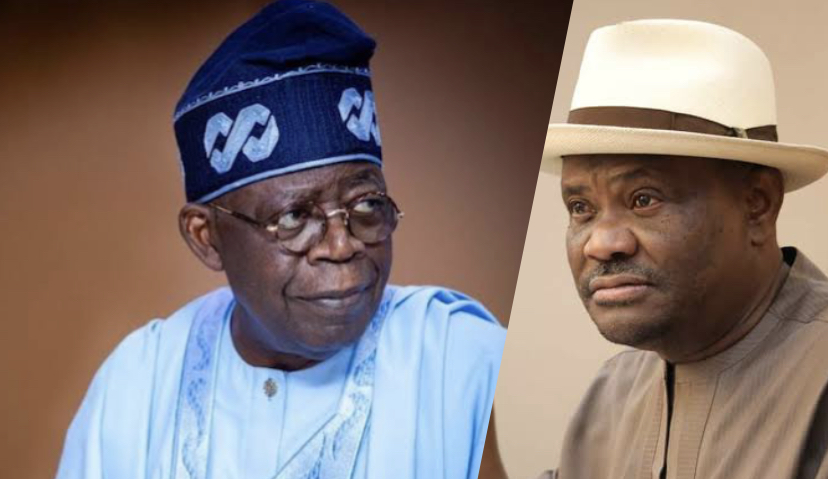 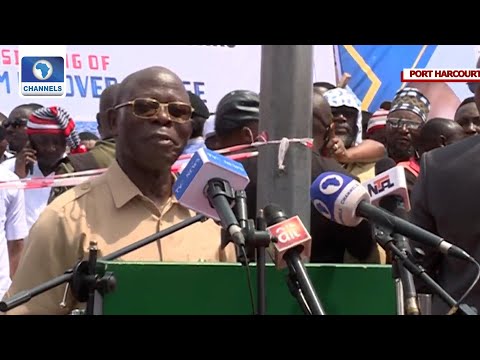 As the crisis rocking the Peoples Democratic Party (PDP) rages on, a former National Chairman of the All Progressives Congress (APC), Adams Oshiomhole, has thrown his weight behind Rivers State Governor, Nyesom Wike.

Oshiomhole said this on Wednesday at the inauguration of the Rumuepirikom Flyover in the Obio-Akpor Local Government Area of Rivers. According to him, leadership is about character and not about making agreements that won’t be delivered on. Oshiomhole, who was governor between 2008 and 2016, was invited to commission the project by Wike. He said executive exchanges have a way of communicating to the people that the political divide is not war.

“Two weeks ago, I had an interview and somebody asked me what are my views with particular reference to the issues in PDP as it relate to Your Excellency (Wike),” Oshiomhole told the Rivers governor. “I said Wike is my man of the year because he is insisting that politics is not about making agreements that we do not intend to deliver on. Leadership is about character,” he added.

Oshiomhole also recalled that the 17 Southern governors in Nigeria met on May 11, 2021, in Asaba, Delta State, and resolved that the next president of Nigeria should emerge from the Southern region. According to him, the Asaba Declaration by governors across party divides was on their own free will and they united on where the next President should come from. “So, if you voluntarily reach an agreement, you are expected to obey your agreement. Now, if you disobey the agreement and said, ‘No, I will stand with the agreement’, what is wrong with that?” Oshiomhole queried.

He lauded Wike for the many “beautiful projects” in Rivers, saying results are stubborn and don’t lie. Wike of the Peoples Democratic Party (PDP) had invited members of opposition political parties to inaugurate projects in the oil-rich South-South state. For months, Wike and four other PDP governors known as the G5 have demanded the resignation of Iyorchia Ayu, saying northerners should not be the PDP national chairman and presidential candidate.

However, Ayu, a Benue indigene, has insisted that he won’t step down till the end of his four-year tenure, even as the G5 made his resignation a precondition to support Adamawa-born Atiku Abubakar’s 2023 presidential ambition.

2023: We defeated Lion of Bourdillon in Osun, we’ll finish him in Lagos – PDP to Tinubu The Peoples Democratic Party (PDP) said it defeated the presidential candidate of the All Progressives Congress (APC), Asiwaju Bola Ahmed Tinubu in the last Osun State governorship election, adding that they will finish him in Lagos. PDP National Chairman, Senator Iyorchia Ayu stated this on Wednesday when he received reports of the Lagos-Osun Reconciliatory Committee headed by Eyitayo Jegede (SAN).

Ayu who commended the committee said their recommendations will help the party to resolve all issues. The PDP National Chairman said: “Since you were inaugurated to help us handle the issue of reconciliation in Lagos and Osun and lately in Ekiti, you have done a very wonderful job.

“Firstly, regarding initial problems we had in the states you have helped us with interventions and recommendations to overcome some of these difficulties leading to the marvellous victory we have in Osun State. “This is an achievement worth celebrating. Lagos is again looking very promising. PDP will have a governor in Lagos and several positions, the Senate, House of Assembly and so many other positions, and of course crown it with the massive victory of our presidential candidate.

“We defeated the Lion of Bourdillon in Osun and we want to finish a good job in his residence in Bourdillon. We can see that happening because we saw him shouting God bless PDP.” He noted that if the party is united it will be easy for PDP to win most elections in 2023. Earlier in his remarks, the chairman of the committee also assured that with unity of purpose PDP will sweep Lagos State.

Jegede explained: “We were able to come up with a memorandum of understanding, bring together the expectations of every person and more importantly the hope and desire of all of them to work together to achieve what we hope will be our victory come February presidential elections and March governorship in 2023, and state House of Assembly.”