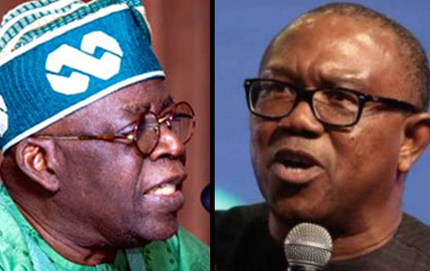 2023: Why we were not at Arise TV town hall meeting – Tinubu, Shettima THE Presidential Candidate of the All Progressives Congress, Asiwaju Bola Ahmed Tinubu, and his running mate, Senator Kashim Shettima have cited hectic campaign schedules and resolve not to give any Television station preference among others as reasons for their absence at Sunday’s town hall meeting of presidential candidates in Abuja.

The People’s Democratic Party, PDP flagbearer, Alhaji Atiku Abubakar, who is out of the country, was represented by his running mate, Senator Ifeanyi Okowa. Explaining Tinubu’s absence, the Tinubu/Shettima Presidential Campaign Council, in a statement by its Chief Spokesman, Mr.Festus Keyamo, said “Tinubu did not attend the Presidential Debate organised by ARISE TV on Sunday, November 6, 2022, for the following reasons:

“Firstly, many radio and TV networks in Nigeria have indicated interests to host such debates and out of deference to other TV and radio stations, our candidate will not be making selective appearances in some networks, whilst ignoring others. As President of Nigeria, by the Special Grace of God, he intends to treat all persons and businesses fairly and equally. “Secondly, the busy and hectic campaign schedules of Asiwaju Tinubu will not permit him to honour all such invitations by different radio and TV networks, hence our decision for him not to start with one TV station and later ignore others.

“Thirdly, our candidate had long before now realised the importance of speaking directly to Nigerians and shortly after unfolding his Action Plan as President embarked on Town Hall meetings beginning with his interaction with the Business Community and other stakeholders in Kano followed by the Town Hall meeting and presentation by experts last week in Lagos. “Tomorrow (Monday), he will be interacting with Agro and Commodity Groups in Minna, Niger State.

“Whilst we thank Arise TV for the invitation, we want to assure Nigerians that we shall continue to hold these debate groups and Nigerians in high esteem. Nigerians will hear from our candidate loud and clear through other forums. “Lastly, out of profound respect for Nigerians, we urge all our party structures and supporters at the grassroots to continue to organise town hall meetings to educate Nigerians on the Action Plan of our candidate as we believe a grassroots-approach to reach Nigerians will also be more profound.”

2023 Presidency: Peter Obi Speaks On Being Invited By EFCC The presidential candidate of the Labour Party, Peter Obi, has said he has never been invited by the Economic and Financial Crimes Commission (EFCC) to answer corruption allegations. Obi stated this on Sunday in Abuja at a Town Hall meeting organised for presidential candidates by Arise Television in partnership with the Center for Democracy and Development (CDD).

The LP Presidential candidate said he has never been questioned by the country’s anti-corruption agencies about any missing money since he left office as Governor of Anambra State. According to Obi, he never borrowed from any financial institution in the country when he was governor of the South East state and didn’t owe any pension, gratuity, or salary.

Obi asserted that he left over $50 million each in Access, Diamond, and Fidelity banks for the state and won many awards for his performance in office. He said, “In a country where those in government are richer than entrepreneurs, they manufacture poverty.

“During my time as a former governor, I served for eight eights. You can go to that state you will find that I never borrowed from any financial institution in Nigeria. I have never been invited or questioned about any missing money anywhere. “The day I left the office, I wasn’t owing any contractor or supplier that has delivered his project, I was not owing pension, gratuity, salary. I left in three banks; Access, Diamond, and Fidelity, over $50 million each for the state.

“I have never borrowed, I served faithfully and I left their money. The system can work if we do the right thing. “Saving money in addition to excellent performance, I won the award for best road network by the Federal Government. I also won an award from Bill Gates Foundation for best in education and health.”