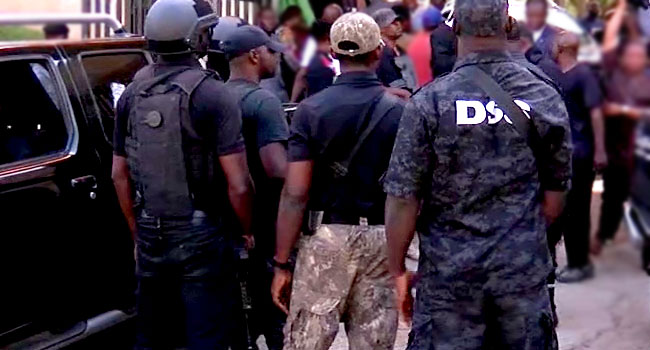 Two terror suspects have been arrested by the Department of State Services operatives who stormed the Trademore Estate in the Lugbe area of the Federal Capital Territory, Abuja, on Monday.

The security operatives were said to have shut the entrance and exit gates of the estate while the operation lasted.

Our correspondent gathered that the two suspects said to be siblings were taken into custody on an allegation of terrorism.

This happened less than 24 hours after the United States and the United Kingdom warned of a possible terror attack in Abuja, especially targeted at government buildings, places of worship and schools, among others. Following this development, the US government has authorised the departure of its non-essential employees and their families from Nigeria.

The US State Department announced this in its updated Nigeria travel advisory on Tuesday evening.

Residents of Trademore Estate who spoke to The PUNCH on Wednesday claimed the operation was carried out by the DSS and some foreign security operatives.

Speaking on the condition of anonymity, a resident disclosed that residents of the estate were practically held hostage during the operation. He stated, “We were in our houses when our estate was locked up. They did not allow us to go out and they didn’t allow people to come in. Those that came for the operation were DSS and some American soldiers. What I heard was that they were looking for some suspected terrorists. When they finished what they were doing, all we saw was that they drove away with some people from the estate.”

Also, a message on the estate’s Whatsapp platform sighted on Wednesday by one of our correspondents urged residents to be vigilant and ensure they know their neighbours. It partly read, “It’s no longer news that there was a high-powered sting operation in Phase 3 this afternoon, culminating in a complete shutdown of our estate. A combination of the American Army and our DSS team were responsible.

“We are unable to give full details of the reason(s) behind the operation; however, we can confirm that there was an allegation of terrorist activities. It is therefore desperately incumbent on every resident to remain vigilant, know your neighbours and report any suspicious movement, person or activities to the exco, street reps and/or the police.

‘’We will continue to do our utmost best to keep the estate safe for all of us. Everyone is responsible for security and there should be no iota of abdication of this responsibility.”

When contacted, the Chairman of the Estate, Adewale Adenaike, confirmed the security operation but declined further comment.

He said, “I can confirm to you that DSS personnel and foreign soldiers visited our estate. You can contact them to get the details of what happened. Let me, however, use this medium to urge residents to be calm and vigilant. The rumours of a planned attack on the estate are not true.”

Calls to the DSS spokesperson, Peter Afunanya, were not answered. He has yet to respond to a text message sent to him on the matter.

Force spokesperson, Olumuyiwa Adejobi, told one of our correspondents that, “All diplomatic corps in Nigeria are protected by the police, and operatives also protect the embassies. In fact, before now, we have deployed armoured personnel carriers to protect the US Embassy and others. Interestingly, the embassies are strategically located in the Diplomatic Drive and well-fortified.”

Meanwhile, the US in an advisory on Tuesday said, “On October 25, 2022, the Department authorised the departure of non-emergency US government employees and family members due to the heightened risk of terrorist attacks.

Despite the security concerns, schools in Abuja have not been shut down, the Publicity Secretary of the National Association of Proprietors of Private Schools, Abuja Municipal Area Council, Paul Edoh, has confirmed.

It was learnt that some parents had requested the immediate closure of schools in Abuja until the situation was brought under control.

However, Edoh explained, “Schools have not been closed down, except for schools within areas like Bwari; not all schools, but schools in the hinterland. But the Federal Government has been able to see how to curtail that and the employment of local vigilante groups has also helped in stamping out the situation.

‘’Private schools within that area are always living in fear. Public schools are more prone to attack. The security beef-up around the schools in Abuja is at zero level. I can boldly tell you that you will hardly see security patrol in some local areas.”

‘’Given the current security situation, and the foreign embassies’ declaration, or perhaps order, it has adversely affected private schools within the Abuja environs. Now some staff of these embassies have withdrawn their children from the top big schools in Abuja here,’’ he disclosed.

Meanwhile, the Federal Government on Wednesday said citizens and non-citizens alike are safe in Nigeria.

The Minister of Information and Culture, Lai Mohammed, stated this in response to questions from correspondents on the security advisories at the Presidential Villa.

Mohammed said “Now, of course, this so-called travel advisory as far as we are concerned as a government, we have in the last few months, taken a firm handle on security.

“But I want to reassure citizens, non-Nigerians and Nigerians living in this country, that security agencies are on top of this matter. Of course, the terrorists would not stop to try to embarrass or intimidate the government but what I am saying is that this country is safe and there is no cause for alarm. No cause to panic.”
Source: Punch