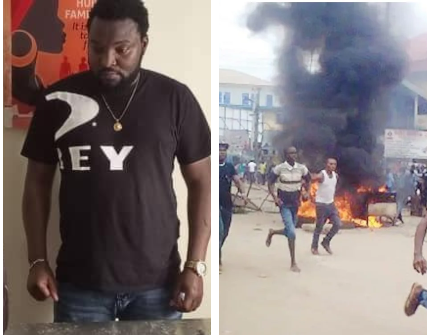 Ex-footballer arrested at Lagos airport for cocaine trafficking
Operatives of the National Drug Law Enforcement Agency, NDLEA, have arrested an ex-footballer, Okafor Emmanuel Junior at the Murtala Muhammed International Airport, Ikeja, Lagos, on his arrival from Sao Paulo, Brazil via Addis Ababa on board an Ethiopian airlines flight with 1.40kg crack cocaine concealed in his bags

During preliminary interview, Okafor disclosed that he was an ex-footballer with the University of Nigeria Teaching Hospital, UNTH Enugu FC, where he played for four seasons before leaving for Sri Lanka in 2014. He further stated that he moved to Brazil from Sri Lanka after playing for two seasons but could not advance his football career in Brazil due lack of official documents.

Two Suspected POS Robbers Burnt To Death In Lagos
An angry mob in Lagos State reportedly killed two suspected Point of Sale (POS) robbers on Saturday in the Igando area of the state.
The incident was confirmed to newsmen in a statement by the state command of the Nigeria Police Force on Sunday, Naija News reports. The suspects according to the command’s spokesman, SP Benjamin Hundeyin, had robbed a POS attendant in the Igando area of the state before people in the area engaged them.

In a post on his verified Twitter page, Hundeyin revealed that the suspects were apprehended on Independence Day. He said that the mob set the victims ablaze and burnt them beyond recognition.

He said, “Police arrived at the scene but the mob had fled. The investigation has commenced.”

The police mouthpiece berated the incident, stating that the force is worried about how to put a stop to the archaic and criminal practice.