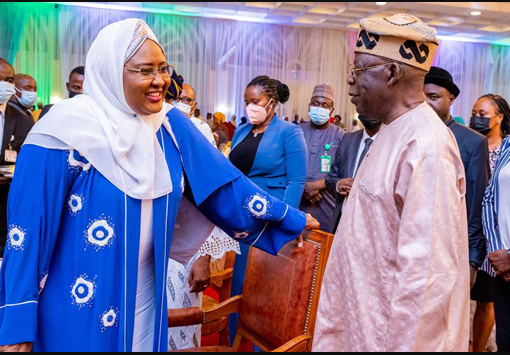 Named the Tinubu/Shettima Women Presidential Campaign Team, the First Lady is expected to lead the women’s wing of the party to victory as its grand patron. They will be serving as Chairman and Co-Chairman of the women’s campaign team respectively.

This was contained in a statement issued by Rinsola Abiola, daughter of late Chief MKO Abiola and active member of the APC, who was also named in the media and administrative committees in the women’s campaign team.
Source: DailyTrust

APC state chapters protest against N20m support fund after party raked billions from primaries
The crisis of confidence in the ruling All Progressives Congress, APC, took another twist yesterday as indications emerged that most state chapters of the party are now at loggerheads with the Senator Abdullahi Adamu-led National Working Committee, NWC, over disagreements regarding the allocation of funds realized from the sale of forms. Although APC was said to have realized at least N30 billion from the sale of nominations and expression of interest forms for the 2023 general elections, it was gathered that the party paid N20 million each into the coffers of the state chapters.
“The state chapters are now complaining that they should have gotten at least N100 million from the funds realized from the sale of forms”, said a party official.

Consequently, some of the chapters are said to be threatening to return the N20 million sent to them by the party hierarchy.
Source: Vanguard