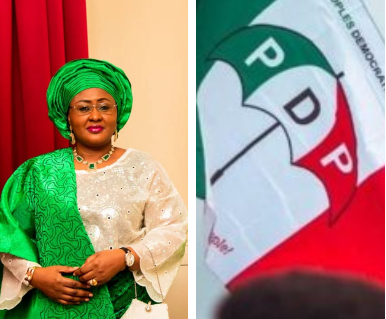 Insecurity, Economic Downturn: Buhari’s Wife Begs Nigerians
WIFE of the president, Hajiya Aisha Buhari, has apologised to Nigerians over the security situation in the country in the last seven years and the prevailing economic situation which have made life difficult for Nigerians.

Hajiya Buhari spoke on Friday at the 62nd Independence Day special Juma’at prayer and public lecture with the theme ‘Shura: The Islamic Foundation of True Democracy’, held at the National Mosque Conference Hall in Abuja. According to her, the noticeable devaluation of the naira and the continuous drop in foreign exchange have taken their toll on the economy and resulted in the difficulties that Nigerians are passing through.

She, however, commended the activities of the military in checkmating insecurity in the country and wished them more success.

“The regime might not have been a perfect one but I want to seize this opportunity to seek forgiveness from the Ulamas and Nigerians in general. We all need to work together to achieve a better Nigeria” she said.
Source: Tribune

Pressure mounts on 16 PDP NWC members to return N450m
The rift in the National Working Committee of the Peoples Democratic Party took a fresh twist on Friday, as Saturday PUNCH reliably learnt that 16 other members who had yet to refund the controversial ‘housing allowance’ to the party were under intense pressure to do so.
A credible source in the party told one of our correspondents that “there is a tendency for most of them to return the money. Some are waiting for the national chairman to return before making a decision.”