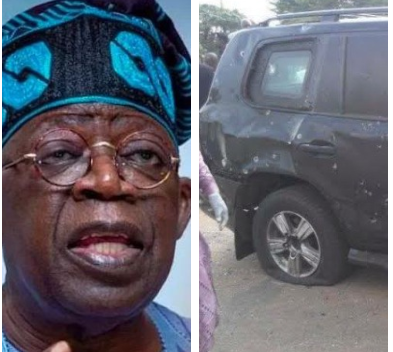 2023: Tinubu, Shettima Jet Out To London Ahead Of Campaigns
The presidential candidate of the All Progressives Congress (APC), Bola Ahmed Tinubu and his running mate, Senator Kashim Shettima, have traveled to London, the United Kingdom.
Naija News learned that Tinubu and Shettima left the country on Saturday ahead of the start of the electioneering campaigns on Wednesday, September 28. In a chat with The Punch, the spokesperson for Tinubu-Shettima Presidential Campaign Council, Bayo Onanuga, confirmed that the duo went to London for vacation.
According to Onanuga, Tinubu and his running mate will be out of the country for a week to prepare them for campaigns and will return to the country in the first week of October.
He said: “He only took a week break for vacation.”
Onanuga also disclosed that Tinubu’s campaign would begin on October 8 and his policy document will be ready and unveiled before October 2.
He, however, revealed that the council will kick off the campaigns with a special prayer in all the APC branches nationwide.
Source: NaijaNews

The NNPP state assembly candidate, who is receiving treatment in a private hospital in the state, told journalists yesterday on his sick bed that he was attacked while returning to Doma after donating relief materials and cash to victims of a flood disaster in Rukubi town. “After the donation in Rukubi town, I was returning to the headquarters of Doma Local Government Area when about nine gunmen opened fire on me from different directions. They shot and hit me on my elbow and back. 46 bullet shots hit and penetrated my car.

According to him, “after I was shot, I accelerated the car and lowered my head and the car stopped when it nearly reached Igbabo village when I came down and ran towards the people calling for help.”

He continued that at the Igbabo village, good Samaritans rescued him, took him on a motorcycle for 20 kilometres journey to Doma town, and was subsequently conveyed for another 20 kilometres to Dalhatu Araf Specialist Hospital (DASH), Lafia, the state capital.

He disclosed that three bullets were removed from his body at DASH where he spent three days in the Intensive Care Unit of the hospital, but relocated to a private hospital in the state.
Source: ThisDay