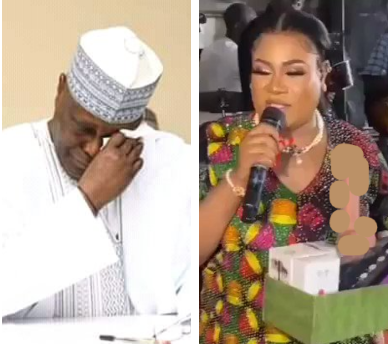 On Sunday, the Nollywood actress alongside members of her family, friends and some of her friends gathered to mark her mother’s one-year anniversary since she passed away.

A video that has since gone viral surfaced online, showing Blessing giving out the rubber male organ in packages as a souvenir.

She proceeded to call on single or divorced women in the crowd, charging them to make do with the s3x toy.

“Help yourself if you don’t have a man. If you know you’re single and proud, let me see your hands,” Blessing said.
Watch VIDEO here

Fresh Trouble For Ayu As PDP NWC Question Disappearance Of N10 billion Nomination Fees
The embattled National Chairman of the Peoples Democratic Party (PDP), Dr. Iyorchia Ayu, has found himself in fresh hot water over the whereabouts of N10 billion realized by the party from nomination fees paid by aspirants.
Naija News reports that the fresh controversy is coming barely 48 hours to the kickoff of the 2023 election campaigns scheduled for September 28, 2022. It was learnt that a bloc in the party is trying to offer each National Working Committee (NWC) member N28millon to gloss over the huge cash in order to curtail any further crisis in the party but some members of the NWC, who rejected the bribe, are insisting on accountability and on getting answers about the depletion of the cash from over N10billion to N1billion.

According to The Nation, the aggrieved camp of Governor Nyesom Wike of Rivers State was pushing for accountability to increase the pressure on Ayu to resign.
Source: Naija News