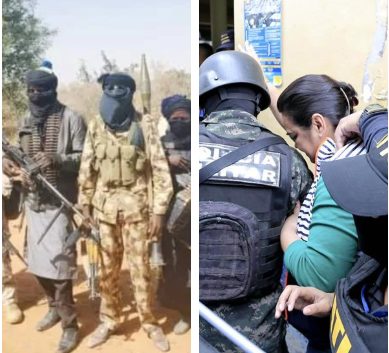 The Director, Defence Media Operations, Maj.-Gen. Musa Danmadami made this known at the bi-weekly news briefing on the operations of the armed forces on Thursday in Abuja. Danmadami said the suspects were apprehended on Sept. 15 at Access Bank, PZ Branch in Zaria while trying to withdraw the sum of N14 million deposited into the account of Abubakar.

He said the relevant agencies were working assiduously to track the said financier and others who had been fingered for terrorism financing.

The director said the military and other security agencies remained committed to apprehending all terrorism financiers and collaborators in the country.

Danmadami also said the troops conducted operational activities in villages, communities, and towns in Sokoto, Zamfara, Katsina and the Kaduna States during the period and neutralized 16 terrorists.
Source: PM News

Bonilla, wife of former President Porfirio Lobo, spent some 12.2 million lempiras (then worth around $590,000) meant for low-income children on personal credit card payments, her children’s school fees and real estate construction, according to the public ministry. Her lawyer, Juan Berganza, said he would appeal the sentence.

“The former First Lady Rosa Elena Bonilla has been sentenced to 14 years and one month in prison for the crimes of continued fraud and misappropriation of public funds destined for social programs,” Carlos Silva, a spokesman for the Supreme Court of Justice, told reporters.

Bonilla had previously been sentenced to 58 years in prison in an earlier trial, which Honduras’ Supreme Court annulled in early 2020, arguing it was full of inconsistencies.
Source: PM News