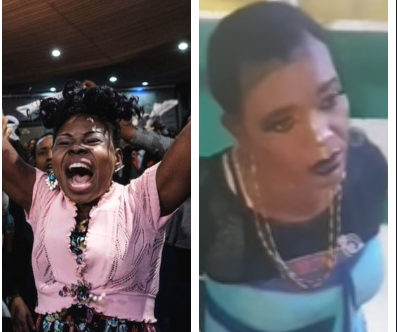 An American Pastor, Dr Juanita Bynum is trending online for charging her members $1499 (About 642,891.12 when converted to Naira) to teach them how to pray. The Pastor’s price list for the 4-week session which includes a certificate was passed on in a flyer she shared on her social media page. See screenshots showing some of her followers’ responses below Male Sex Worker Disguising As Woman Nabbed In Lagos (Video)
The Lagos Police Command has arrested a male sex worker fronting as a woman in Ikeja, the capital city.
According to reports, the cross-dresser, who is a native of Okrika in Rivers State was nabbed by a soldier who handed him over to the Police. The soldier had accosted the male sex worker at one of the hookup joints in Ikeja after discovering he was a male and not female.

The cross-dresser was said to have attempted to escape but was immediately held down by the uniformed man. After he was uncovered, the cross-dresser during interrogation admitted that he is a man.
He said that he ventured into cross-dressing because he needed money to pay for his sick mother who was involved in an accident and needed money to undergo an operation in Port Harcourt.

He confessed that he started the trade two months ago, adding that he is based in Lagos and usually plies his trade at night by standing by the roadside, waiting for ‘customers’.