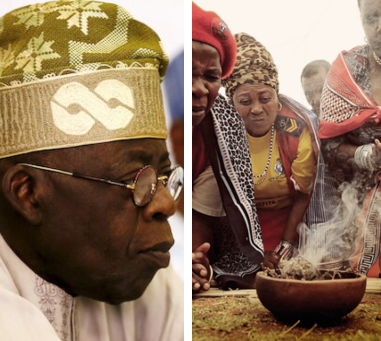 Tinubu: State Governors’ Unavailability Forces APC To Halt Campaign Activities
The unavailability of governors elected on the platform of the All Progressives Congress (APC) has resulted in the temporary suspension of the party’s campaign activities.
Naija News understands that the tight schedules of state governors had forced activities lined up by the APC national leadership and the National Working Committee (NWC) to strategically position the party for victory were postponed. It was gathered that some of the activities include the commencement of the zonal reconciliation visits of all the geopolitical zones, starting with the visit to Kano State in the North West and Borno, in the North East.

Speaking to Saturday Sun, a source said the activities were cancelled because most of the APC governors were busy.
Source: NaijaNews

Nigerian Police Invade Seminar On ‘Witchcraft Beliefs, Persecution Of Witches’ In Benue, Chase Away Attendees
Operatives of the Nigeria Police Force have reportedly invaded a seminar venue on “witch persecution” scheduled to be held on Saturday in Makurdi, the Benue State capital. The Executive Director of Advocacy for Alleged Witches (AfWA), Dr Leo Igwe, confirmed the police invasion in a media release on Saturday, describing the action of the police as unacceptable more so when the Commissioner of Police in the state was duly invited for the programme.
Igwe disclosed that all the attendees from various human rights organisations and civil society organisations including from the National Human Rights Commission who had seated were chased out of the venue.
The statement from the organizers partly read:
“The police have invaded the venue of the seminar on “witch persecution” to be held today in Makurdi, Benue State. At least 15 police officers who arrived in five vehicles are at the venue, Green Belt Hotel in Makurdi.
“The DPO of the area, Daniel Ezeala, said they had been instructed to stop the meeting and urged every attendee to vacate the venue. Another officer said that they got some intelligence that witches were meeting at the venue.
Source: Sahara Reporters