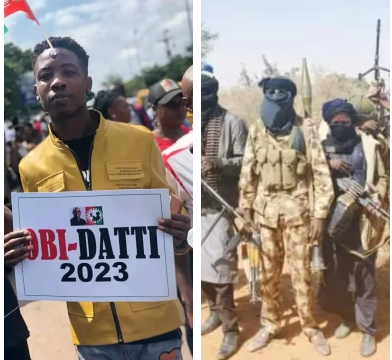 They specifically asked the court to restrain the LP, its presidential candidate Peter Obi, his vice; Yusuf Datti Baba-Ahmed, one Julius Abure, and their loyalists from holding the rally, until the hearing and determination of their motion-on-notice of September 12.

Zamfara Residents Give Canoe, N19 Million Protection Levy To Terrorists To Have Access To Farmlands

Terrorists operating in Zamfara have collected about 19 million as a protection levy from residents of 14 communities in the Anka Local Government Area of the state.

The communities also bought a canoe for the gunmen ahead of the rainy season.

SaharaReporters gathered that most of the affected villages are under the control of the terrorists. Residents said the move became necessary following the nonchalant attitude of the government and security agencies who seemed to have abandoned them to their fate and jettisoned any idea of providing security for farmers.

They lamented the incessant killings and abductions in the communities by gunmen who operate freely.
In 2019, the state government signed a peace agreement with the gunmen. But despite all these, communities in the state are still being attacked and residents kidnapped and/or killed.
Source: Sahara Reporters