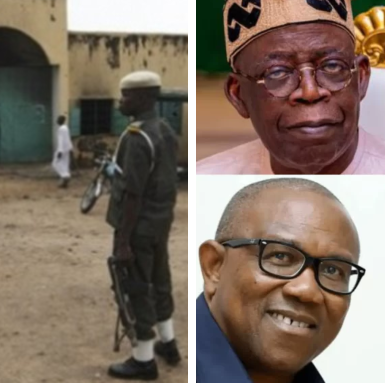 Protest In Kuje Prison Over Death Of Inmate
There is palpable tension at the Kuje Correctional Centre as inmates in the early hours of Monday protested against the death of their colleague.
SaharaReporters gathered that the protest was triggered following the death of the inmate allegedly without medical attention. Sources told SaharaReporters that some prisoners again tried to escape from the prison facility amidst the confusion but were prevented by warders.
“The guy has been sick for weeks now, but the situation deteriorated last night and the wardens refused to attend to him until he gave up the ghost around 6:28 am this morning,” a prison official told SaharaReporters.
Recall Kuje prison in Abuja, Nigeria’s capital city was attacked by Islamic State’s West Africa Province (ISWAP) fighters on July 5, 2022, following which hundreds of inmates were freed, including terrorists.
Source: Sahara Reporters

ASUU to continue strike, fails to ease tension
After 196 days of being on industrial action, the Academic Staff Union of Universities, ASUU, is set to continue its lingering strike that has paralysed public universities in the country. This was arrived at after a heated and stormy National Executive Council, NEC, meeting of the union in Abuja.
The meeting, which started on Sunday night and slid into Monday morning, took place at its National Headquarters at the University of Abuja.
Earlier, a member of the NEC, who wants to be anonymous, told The Punch in Abuja that during the meeting of some local congresses held last week, most of them voted for strike extension.
The outcome of today’s meeting confirms the decision of the majority of the members to extend the strike.
Source: Vanguard

Slaves’ curse behind stunted growth in Yorubaland – Akintoye
A Yoruba leader and Head of Yoruba Nation Self-Determination Struggle, Prof. Banji Akintoye, has tendered unreserved apology to the victims of the Trans-Atlantic slave trade in Yorubaland.
Akintoye, who is a professor of History, said some of the victims of the slave trade placed a curse on the future generation of Yoruba people for colluding with the Whites to sell them into slavery back then. Akintoye, in an open letter to the Yoruba people which he personally signed and made available to journalists through his Communications Office, on Sunday, said “the Holy Spirit told him that the spirits of those our forefathers sold for peanuts to Portuguese and Dutch people as slaves are behind the lack of growth, development, progress, peace and unity in Yorubaland, and among the Yoruba people.”
“The curses placed on the Yoruba people by victims of the Trans-Atlantic slave trade, many of whom jumped into the Atlantic Ocean during their forced trips to Europe and America, need to be cleansed in order for the Yoruba people to enjoy God’s favour, cohesion, unity and progress
Source: Punch The presidential debate, tagged “The Diaspora Listens”, is scheduled to hold on November 26, 2022 virtually, according to a statement signed by Mr Olayinka DanSalami, on behalf of the organising committee.
The debate is being organised by the ‘Organisation for the Advancement of Nigerians (OAN, Inc.)’, in collaboration with 15 other Nigerian partner organisations in the United States.
The statement was made available to the News Agency of Nigeria (NAN) in New York on Sunday.
DanSalami said that letters of invitations had been sent to the presidential candidates.
Source: The Sun