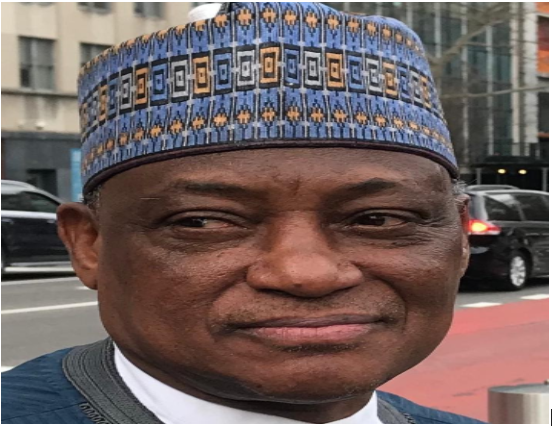 General Dan-Ali is a levelheaded patriot who is beyond reproach, he is outstanding and a consensus builder and one person who will never improve himself at the expense of the masses, he is known to be Just, and humanly possible, well trained and behaved professional military leader who turned partisan politician after his retirement to become the minister of defense at the country’s trying time.

During his service as a military officer, he served in different commands and staff capacities, some of which includes commanding the Nigerian contingent supporting the united nations Africa hybrid mission in Sudan, with all this positions, experience and exposures makes it easy for him to bring the security situation in the northeast to barest minimum and a lasting peace that has never been witnessed for quite some years before his appointment as the defense minister in 2015.

Dan-Ali’s years of visionary and philosophical leadership and service delivery mandate, speaks volume. After his successful and achievable retirement from active service in 2013, he was lured by well meaning Nigerians to participate in partisan politics and his voluminous records in military attracted him the position to work along president Muhammadu Buhari as his defense military in containing the security threat that was ravaging the peace of the country.

He was confirmed as a cabinet minister by the Nigeria Senate on October 2015 and was appointed minister of defense by president Muhammadu Buhari in November 2015 when the northeast was at the peak of Boko haram enclave.

Going by Dan-Ali’s antecedents, he has achieved quite a milestone in his term as minister of defense, he has excelled security wise and distinguished himself as an outstanding minister, if the reports making the rounds are anything to go by.

Men make history and not the other way round, in periods where there is no leadership, society stands still, progress occurs when courageous, skillful leaders seize the opportunity to change things for the better. Look at how far we’ve come, that is the aim of Dan-Ali’s Footprint’s retrospect, to asses our leaders after they’ve had enough time to take action but before they’ve solidified their legacy; and although it seems like an arbitrary measures.

He might be another year older on every 25th August, but he still remains that phenomenal leader who Nigerians, especially the northeast have ocean of respect and admiration for, may he forever keep chalking longer than life accomplishment.

Finally, the most anticipated month has arrived. August is a ceremonial month when great leaders were born. Nigeria is among the lucky country blessed with outstanding leaders with traceable footprint in the country’s history, among are, General IBB the greatest military president with uncommon achievements, the Maradona of all times, Late Abiola the political Guru, Yar’adu’a, Jibril Aminu of blessed memory. When mentioning August’s legendary Icons, General Mansur Dan-Ali is not an exception, because he is among the movers and shakers who contributed Immensely in his active service as military commander, also in containing security threat as minister of defense among others.

It is fortunate for Nigerians to know someone as extraordinary as you, your input throughout your service to Nigeria/Nigerians and the world will but last forever, Nigerians greatly admired your previous work ethics and ambition, your success in combating insecurity as defense minister bear testament that life doesn’t bless you with what you wish for, but rather what you worked for.

General Mansur Dan-Ali has worked so hard and gave so much to the country, it is time to celebrate an ICON @62 we see the countless sacrifices you made for the country, bringing sustainable peace and hope when Nigeria”s Boko haram was on rampant.

Sir, you’ve worked so hard, you’ve sacrificed, you’ve being fearless and shown unwavering commitment, you’re amazingly outstanding, we commend your efforts toward combating terrorism, crime and criminality to a halt. We hope on this important day, you can take some time to look back at your life and feel a profound sense of accomplishment and pride in yourself, we certainly see it.

You’re one-of-a-kind human being; you have so much potential and so much to offer to the country because you’re still agile and strong, keep striving towards greatness and never look back, we hope that you never lose sight of your inner purpose and strength.

What sets you apart from others, is your professionalism, commitment and selfless service delivery mandate, you’ve left a traceable footprint in the sand of history, you’re an outstanding leader worthy of emulation. You’re not just a legend but icon of security, you’re a monumental blessing to Nigeria and Nigerians and the world at large.

Dan-Ali’s experience and professional performance as vice chairman Nigeria security council for 31/2 years has always being his arsenal to tackle any security challenge in the country during his active service as military commander and as minister of defense when it comes to securing the nation. Sir, you’re one of the most important military legend to ever walk the surface of this earth to contain terrorism, crimes and criminality, what a priceless gift your accomplishment have been to mankind.

You’re a wonderful leader of the world of yesterday, today and the future. We thank God for making you the type of persona you’re today. All the great leaders that are born in August have had one characteristic in common, it was the willingness to comfort unequivocally, the major anxiety of their people in their time, this an not much less, is the essence of their leadership.

Happy birthday to Security ICON of all time, to Nigerians you are an extraordinary servant whose life is a work of professionalism and commitment. Age with Abundant grace.