BREAKING: Nigeria did not file any case against Sunday Igboho in Benin – Lawyer

BREAKING: Nigeria did not file any case against Sunday Igboho in Benin – Lawyer

Mr. Ibrahim David Salami, a lawyer to Yoruba activist, Chief Sunday Adeyemo alias Sunday Igboho has revealed that the Nigerian government did not file any case against his client in court. Salami, during an interview with BBC Yoruba on Tuesday afternoon, disclosed that he was shocked to find out on Monday that Nigerian authorities did not file any case against the embattles secessionist leader.

POLITICS NIGERIA recalls that Igboho has been in hot water since last week after he was arrested at the Cadjehoun airport in Cotonou, Benin Republic alongside his wife on their way to Germany.

Salami said; “I was shocked when Sunday Igboho was sent to Benin Prison yesterday. When we started this case last week, the Prosecutor told us it was the Nigerian Government he had a case with but yesterday we realised that the Nigerian government didn’t even file any case against Igboho.”

“The case he has, as the Judges told us, is with the Benin Republic Government. The Government of Benin Republic said Igboho entered their country improperly with the aim of committing a heinous crime against the country, he was asked to mention those who accommodated him and drove him to the Airport but Igboho said he ran for his life in Nigeria and he didn’t commit any crime.”

“The Judges weren’t convinced, he said Igboho should be transferred to Prison until all those involved in his activities in Benin Republic are apprehended. Investigation is still ongoing..”. Igboho is currently in a prison in Benin Republic pending the outcome of investigations.

At least 57 migrants die in shipwreck off Libyan coast -U.N. At least 57 people drowned on Monday after a boat capsized off the Libyan coast near Khums, the latest tragedy in the Mediterranean where more than 1,100 have perished this year, the U.N.’s International Organization for Migration (IOM) said. Bodies have not been recovered from the shipwreck, but survivors included migrants from Nigeria, Ghana and Gambia, IOM spokeswoman Safa Msehli told Reuters.

“According to survivors brought to shore by fishermen and the coast guard, at least 20 women and two children were among those who drowned,” she said earlier by tweet.

The migrants, the majority from West Africa, departed from Khums, presumably to reach Europe, Msehli said.

“Despite an increase in arrivals in Europe, there is no crisis of numbers and arrivals remain manageable through better solidarity and improved governance and management of migration,” she added.

Migrant boat departures to Italy and other parts of Europe from Libya and Tunisia have increased in recent months with better weather. Hundreds of thousands have made the perilous crossing in the last years, many fleeing conflict and poverty in Africa and the Middle East. 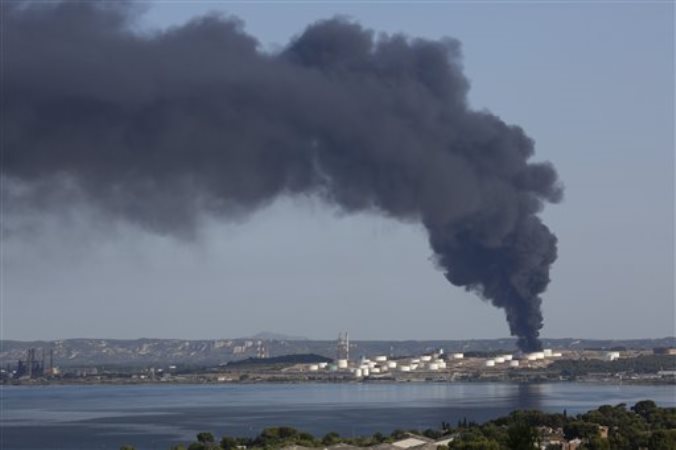 At least 16 people were injured and five missing after an explosion at a chemical park in Leverkusen, western Germany, officials said Tuesday, urging residents to stay indoors as a huge column of black smoke billowed from the site.

The blast happened at around 09:40 am (0740 GMT) “for still unknown reasons”, Chempark operator Currenta said in a statement.

Germany’s NINA warning app sent an “extreme danger” alert to residents, telling them to close all doors and windows and keep the emergency numbers free as much as possible.

Currenta said the incident occurred at Chempark’s landfill and waste incineration area in Leverkusen’s Buerrig district, which is separate from the main industrial park that houses numerous chemical companies including Bayer, Lanxess and Evonik Industries.

The city of Leverkusen said on Facebook that 16 people were injured in the incident, four of them seriously.

According to city officials, the blast led to a fire at a solvent storage tank that took several hours to put out, with firefighters from nearby Cologne called in to help with the efforts.

Large numbers of police, firefighters and rescue crews were deployed to the scene, as well as pollution detection experts amid concerns that the smoke coming from the site could pose a health risk.

Police in the city of Cologne tweeted that they were closing several motorways in the Leverkusen area because of “major damage”.

They urged drivers to steer clear of the area and repeated the message that residents should move indoors “and close all windows and doors as a precaution”.

Locals shared images on social media of the black cloud rising into the air, with some saying their windows were rattled by the force of the explosion.