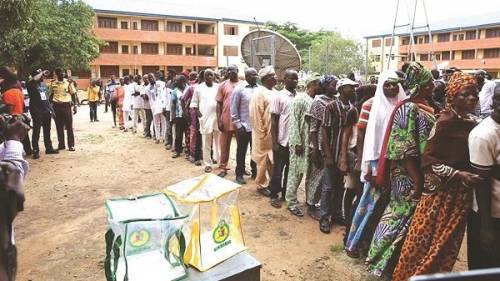 The voting process at Ojokoro Local Community Development Area in Lagos State has been manipulated with supporters of the All Progressives Congress allegedly voting without using the Permanent Voter Cards.

A reliable source informed SaharaReporters that the ruling APC, in a bid to rig the election, mounted pressure on the election officers to allow the APC supporters without voter cards to cast their votes.

The source noted that there had been only four real voters at the polling unit as of the time of filing this report.

He said, “We are having issues of manipulation here at Ojokoro Local Community Development Area. APC officials want to cast votes without cards to top up the numbers we have. There have only been four voters so far.”

Meanwhile, SaharaReporters earlier reported that the Nigerian Police Force in both Ogun and Lagos states warned that it would not tolerate violence and thuggery among politicians and their supporters.

The state Commissioner of Police, Hakeem Odumosu, in a statement, had said the command had put measures in place to enforce the restriction of movement across the state between 6 am and 3pm, adding that only those on election duty and essential services on the election day would be exempted. Yoruba nation agitator, Sunday Igboho, was arrested in Benin Republic based on the directive of the Nigerian government, but there has been no request yet for his extradition, one of the Beninese lawyers of the activist, Ibrahim David Salami has said.

Salami, who spoke in an interview with BBC Yoruba also revealed the charges levelled against Igboho which led to the arrest of the agitator alongside his wife at an airport in Cotonou, Republic of Benin last Monday.

The lawyer said there were three reasons given by the Nigerian government to request arrest of Igboho by Benin Republic as stated in the charges against the agitator in court last Thursday.

He added that Nigeria has not provided proof of the allegations.

“But what we are not happy about is that Igboho has not committed any offence here and if he is arrested here, it is because of the Nigerian government.

“And before he should be arrested, there should be proof that he has violated Nigerian law, but we don’t have that here now.

“What we don’t want to happen if for him to be detained here so that the Nigerian government will perfect the process of his extradition.

He added that sending Igboho back to Nigeria will be like sending him to his death given what happened when security operatives raided the Ibadan residence of the agitator.

Salami said he and other lawyers are determined to ensure that that did not happen.

“What is important to us is that never, never – we must not allow Igboho to be extradited to Nigeria, because if we allow that, the way security operatives have been harassing him, we would have send him to his death.”

He further revealed that lawyers are working to get a refuge status for Igboho in Benin Republic, so that he can stay in the country if he cannot to travel to Germany after his court case.