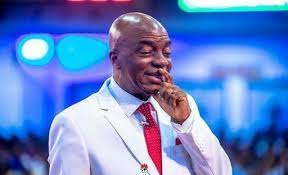 The President and Founder of the Living Faith Church Worldwide, also known as Winners Chapel Worldwide, Bishop David Oyedepo has revealed that he would “never” join any political party to contest for any political position in his life.

The renowned gospel preacher and businessman stated this on Sunday during a sermon at the first service in the church headquarters in Ota, Ogun State.

According to Oyedepo, God has placed him above all political positions in the country, including the presidency.

He revealed that he got the revelation from God even before his wealth emerged.

He said, “Will I ever be in a political party in my life? No. Gone forever.

“I knew God has positioned me far above all nations even when I was not above a town or a street. I knew it by devine insight. That is where God is taking you to”. Lagos, Oyo, Rivers, Kaduna, Kano and Plateau as well as Abuja have been put on red alert to ensure a safe and healthy nationwide Eid-el-Kabir celebration.

The Presidential Steering Committee (PSC) on COVID-19 declared this on Saturday night amid the confirmation of the Delta Variant of COVID-19, rising infections and hospitalisation.

The PSC has recommended, among others, the decentralisation of Eid Prayer to Friday Prayer Mosques.

The prayer must hold outdoor.

Other recommendations are the suspension of Durbar activities and enforcement of limitations on all Indoor gatherings.

The PSC Chairman and Secretary to the Government of the Federation, Mr Boss Mustapha, said the red alert was part of the preventive measures against a third wave of the pandemic.

He also warned that all states of the federation should heighten their state of preparedness and continue to enforce all protocols put in place, given the greater ease of spread of the Delta variant.

“These steps are critical as we begin to see worrisome early signs of increasing cases in Nigeria.

“The PSC shall continue to minimise the risk of importation of variants of concern into the country by strengthening Surveillance at all Points of Entry (POE), enforcing extant quarantine protocols and sustaining the current restrictive measures against travellers arriving from India, Brazil, Turkey and South Africa.

“The PSC felicitates with the Muslim Ummah on the occasion of the Eid-el-Kabir celebration. It however, urges all State Governments and Religious Leaders to be mindful of the potential for wider spread of the virus during large gatherings,” he said.