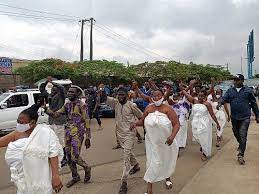 The Yoruba Nation rally in Lagos has turned rowdy as traditionalists dressed in their white attire stormed the venue of the protest.

Security Operatives teargassed the protesters but the defiant protesters have refused to back down.

The traditionalists while speaking to policemen urged them to protect them rather than teargas them.

President Uhuru Kenyatta eulogized Kenyan industrialist Naushud Noorali Merali as a gifted businessman whose contribution to the progress of the Kenyan nation shall be dearly missed.

The President further stated that Merali’s businesses created thousands of jobs for Kenyans contributing significantly to the stability of the Kenyan economy.

“I have received the shocking news of the passing away of Mr. Merali with a heavy heart. The cruel hand of death has robbed our country of a successful entrepreneur whose investments contributed significantly to the economic stability and progress of our country.

“Mr Merali’s business acumen created thousands of direct and indirect jobs for our people and wealth that helped uplift many of our households from poverty. Alongside his celebrated business exploits, Mr Merali was a philanthropist whose generous giving earned him the ‘Chief of the Order of the Burning Spear’ state commendation,” President Kenyatta eulogised. The businessman was born on January 2, 1951, in Nairobi.

“I am deeply saddened by the passing away of Naushad Merali. A renowned and distinguished international entrepreneur, industrialist, and philanthropist. Our prayers are with Zarin, Yasmin and Sameer Merali,” ANC Party Leader Musalia Mudavadi tweeted on Saturday, July 3.

“We are very sad to hear of the passing on of Naushad Merali this morning. Our thoughts are with Sameer Merali and the rest of the Family. May he rest in peace,” Group Chief Technology Innovation Officer, Liquid Intelligent Technologies Kenya added.

Merali was the founder of the Kenyan mobile service provider Kencell and also Sameer Group, a business conglomerate active in agriculture, construction, information technology, property and finance. He was also the former Chairman and largest individual shareholder of Bharti Airtel’s operations in Kenya. As a philanthropist, the deceased has aided hospitals and needy schools through his NGO, Zarina and Naushad Merali Foundation. The deceased was a close friend of President Uhuru Kenyatta and the first family. In 2014, Forbes placed Merali at position 39 in the list of richest Africans with an empire worth of Ksh55 billion. He leaves behind his widow, Zarin Merali and children. Merali will be buried on Saturday, July 3.