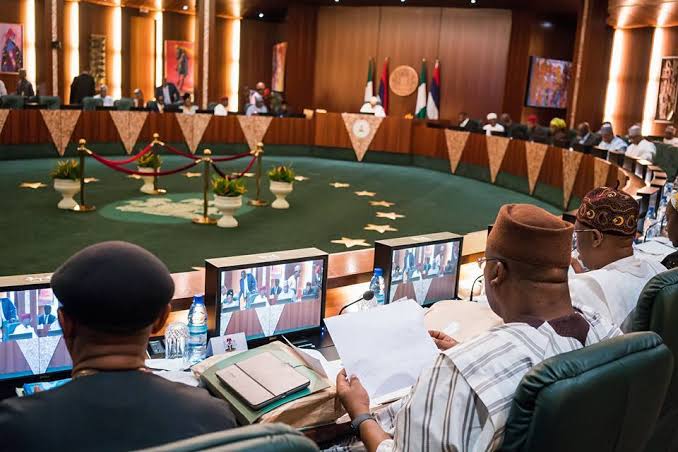 The National Identity Management Commission (NIMC) has confirmed that some enrolment centers across the country were shut down due to the non-adherence to the COVID-19 pandemic prevention protocols.

NIMC also advised applicants that the Commission would be adopting a number-issuing style in the meantime in order to manage crowd, in line with established COVID-19 regulations.

“Shut down of some enrollment centres:

The NIMC wishes to inform members of the general public that some enrolment centers were shut down today.

“This was due to the non-adherence to the Covid-19 pandemic prevention protocols:

“As a control measure, the Commission would be adopting a *number-issuing* style in the meantime. A determined number will be issued daily on a first-come-first-served basis.

This is to manage the crowd in line with established covid-19 regulations.

“We hereby regret any inconvenience this action must have caused.

The Commission will continue to devise ways to serve the public better.

Recall that the Federal Government had approved 173 centres and 30 state government institutions for the enrolment of all persons, including legal residents into the National Identity Database (NIDB) on behalf of the NIMC.

For those without NIN, the deadline has been extended to February 9, 2021.

How Olu of Warri died of COVID-19

The Delta first class monarch, 65, was said to have died barely a week after his fifth coronation ceremony.

Reports say he may have been exposed during the ceremony. The Guardian mentioned that he was believed to have met late army general, Olubunmi Irefin who also died from COVID-19 complications, penultimate week.

The Olu palace chiefs have yet to confirm the incident believed to have occurred on Monday morning. Palace chiefs, in sombre mood were not willing to confirm or deny the development.

A source told Sahara Reporters that palace workers had besieged shops near the palace to get strong alcoholic drinks as they believed it would cure them of COVID-19 should they have contracted it from the monarch.

“Olu of Warri is dead but the palace chiefs are trying to keep the information hidden from the public till they are sure the time is right,” the source said..

Makinde a “baby governor”, not leader of South-West PDP – Fayose

Fayose described Makinde as a “baby governor”, and not his leader while receiving prominent members of the Peoples Democratic Party, PDP, members who paid him a solidarity visit in Lagos on Monday.

The delegation was led by Senator Nicholas Tofowomo, representing Ondo South District in the National Assembly.

Governor Babagana Zulum of Borno State, yesterday visited Jakana, one of the major towns along Maiduguri-Damaturu highway, where he expressed serious anger over frequent attacks on travelers and villagers by Boko Haram, latest of which was Friday’s abduction of over 30 travelers.

This came as governors of the North Central zone resolved to promote the ranching of cattle as well as assist genuine livestock farmers in the zone to embrace the practice.

Zulum said it was disappointing that majority of the attacks within the last two years, took place between Auno and Jakana, a distance of about 20 kilometers, wondering why the military could not secure the area.

According to him,  “I have had occasions to defend the Nigerian military to boost the morale of commanders and their troops at the front lines because I know the true picture of things. However, I am really disappointed that despite all support from both the Federal Government and from us in Borno State, our military is failing to secure an area of 20 kilometers, which is the distance between Auno and Jakana.

And incidentally, majority of Boko Haram attacks along this Maiduguri-Damaturu-Kano road, keeps happening between Auno and Jakana. So, if the military cannot secure 20 kilometers, how can they keep us with the hope they will defeat the Boko Haram?

“With all you (journalists), we drove from Maiduguri to here, Jakana. We did not see soldiers on the road. We did not see even our own Rapid Response Squad on this road and they were trained, employed, kitted and paid to protect all Nigerians within their areas of operation and these Nigerians include travelers plying this busy and important road.”

The governor however, assured residents that he would hold a security meeting and come up with more measures to secure the highway.