GRAPHIC! Meet The Girl Born Without A Face 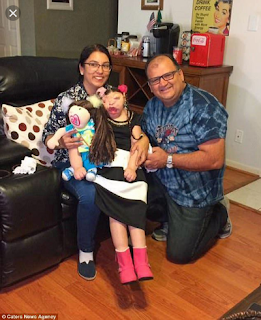 Reports have it that a girl identified as Vitória Marchioli, from Barra de São Francisco in Brazil, with a genetic disorder known as Treacher Collins Syndrome which has prevented 40 of her facial bones from developing properly recently celebrated her ninth birthday.

Victoria as a baby, had her eyes, mouth and nose displaced, doctors doubted she would survive her first few hours of life.

The doctors even refused to feed her, told her family to go and make funeral arrangements while they wait for her to die.

However, earlier this month she reached her ninth birthday with care and devotion from her family.

According to her father Ronaldo, 39, he said: ‘Doctors can’t explain how she has lived so long, but they believe it is down to our care and the love we have for her that has kept her alive.

‘We’re hoping to continue fundraising to give our daughter a better quality of life and giving her the best appearance we can.

‘We fight for her so that she can look better and have a better quality of life. We love her and are thankful for having her alive.’

Treacher Collins Syndrome is said to affect just one in 50,000 people.

‘In future, we hope humanity will have more love for people independent of their appearance, skin colour, race, religion and more.’

Mr Marchioli said: ‘Vitória receives all the care, affection and possible love that we can give her, we try every day to help her as much as we can.

The girl’s family say their daughter is bullied over her appearance despite eight operations on her face.

The family had transferred her to a specialist at two days o,where her condition was diagnosed and a week later her doting family took her home.

Since then she’s had eight surgeries to reconstruct her eyes, nose and mouth as well as stimulate her motor functions, most recently at Shriner’s Hospital in Texas, USA.

Mr Marchioli, a contract chauffeur, said: ‘She looked a little strange when she was born she had a big opening on her face and a very open eye, she was different from our other children.

‘Doctors told us she would not survive and that she only had one or two hours to live, they didn’t give her any chance of survival.

‘She was transferred to a specialist unit at another hospital in the capital to get more information on her health and the condition.

‘She does not have a well-defined bone structure because 40 of the bones in her face did not form, which affected her eyes too.’

But despite their struggles and her uncertain future, her father and mother Jocilene, 43, say they are grateful.